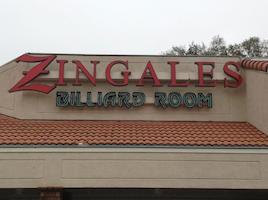 The Women’s Professional Billiard Association (WPBA), Regional Tour Championships take place at  Zingales Billiards in Tallahassee, Florida, January 7th-10th, 2016. The WPBA would like to thank Michael Zingale, owner, for completing the RFP process and congratulate Zingales on being selected to host the ultimate event in regional tour competition. 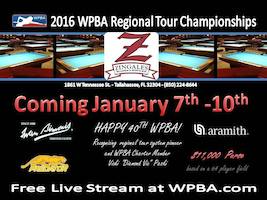 The RTC will be held January 7th-10th, 2016 and will consist of 64 players competing in a round robin/double elimination format. WPBA Regional Tour Players from across the U.S., who qualify through one of (13) WPBA Regional Tours and are WPBA members in good standing, will be invited to participate. The winner of this prestigious event takes home the title “2016 WPBA Regional Tour Champion”, a portion of over $11,000 in prize money (based on a full field), and a special invite to compete in the 2016 WPBA Masters Championship held at Soaring Eagle Casino and Resort in Mt. Pleasant, MI, February 3rd-7th, 2016.

Spectators will enjoy watching the best amateur and semi-professional players the sport has to offer. The WPBA invites you to come and share in the thrill and excitement of the Regional Tour Championships. The RTC would like to thank its official cloth sponsor, Simonis Cloth, and official cue sponsor, Predator Cues. If you are unable to attend, please tune in to the live stream, sponsored by Simonis cloth, at www.wpba.com.

The WPBA was established in 1976 under the name of the Women’s Professional Billiard Alliance and is celebrating its 40th Anniversary in 2016 as the oldest pro player organization in the sport. The WPBA sanctions and produces the Women’s Pro Billiard Tour, which features the greatest women players from around the world. For more information about the WPBA, its top players, and sponsors, visit www.wpba.com.