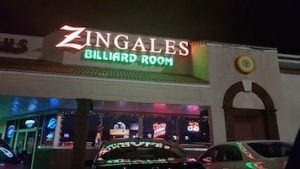 The Women’s Professional Billiard Association (“WPBA”) is pleased to announce the signing of a 3-year
deal with Zingales Billiards in Tallahassee, Florida, to host the prestigious WPBA Regional Tour
Championship (“RTC”). Each year, top-ranked players from each WPBA sanctioned Regional Tour receive
special invitations to compete for thousands of dollars, a WPBA Pro Tour Card, and the auspicious title
of “WPBA Regional Tour Champion”. The RTC happens only once a year, showcasing the greatest, semiprofessional
pool players in the U.S., aspiring to raise their game while competing on a WPBA Regional
Tour.
In late 2015, after an extensive vetting process, Zingales was selected to host the 2016 RTC, and
following all of the positive player reviews, WPBA made the decision to bring more stability to one of its
longest-running, annual events. “We’ve signed a venue that the regional tour players love, and
established firm dates in order for them to plan their trips in advance, for the next three years”, says
Kim Newsome, WPBA President. Michael Zingale and the entire Zingale family couldn’t be happier. “I’m
excited about the 3-year deal with the WPBA. The 2016 event was great. It was the first time we worked
with the WPBA, and the first time we had a full field, women’s event. The thing that stuck out the most
from that event was how wonderful all the ladies were. There is always at least one issue when I have
my open events with players. We didn’t have one issue and the women were so polite to our staff and
very complimentary of our place. The event really went well. I can’t wait to see some of the ladies again
and hopefully some new faces too. The 2017 RTC will be great and we can’t wait to watch the ladies in
action. Many thanks to the WPBA for this opportunity,” says owner Michael Zingale.
This year, there will be some new upgrades in store for WPBA Regional Tour Players. New Delta-13 Elite
Racks will be provided for all twenty (20) 9’ tables and some of the older tables have been improved
with new anchors for rail bolts. “I always try and do a few upgrades to the room every year for the
players. Upgrades are pricey, but well worth it in the long run”, says Zingale. Aside from the impeccable
playing equipment, Zingales is adding an 85″ and two (2) 70″ TV’s for its guests. “Watching the live
stream on the 85″ will be awesome for spectators who can’t get a birds-eye view of the table”, says
Zingale.
For the next three years, the RTC will be held on January 12th-15th, 2017, January 11th-14th, 2018, and
January 10th-13th, 2019, at Zingales Billiards, located at 1861 W. Tennessee St., Tallahassee, FL 32304.
The annual event consists of sixty-four (64) WPBA Regional Tour invitees from across the U.S. and
Canada, competing in a 4-day, round robin, double-elimination format. Spectators will enjoy watching
the best semi-professional players that women’s billiards has to offer, in person, or via the WPBA Live
Stream available at www.wpba.com. The WPBA invites everyone to share in the thrill of this billiard
extravaganza!
The WPBA is the governing body of women’s professional billiards in the U.S., and this year, celebrates
its 40th anniversary. The WPBA Regional Tour System is the grass roots system that feeds the WPBA Pro
Billiards Tour. Amateur and semi-professional, female players, who aspire to play women’s professional
billiards, must qualify through this elite system in order to attain the sought-after title, WPBA Exempt
Professional. Exclusively, WPBA Regional Tour Players gain access to WPBA Pro Event Qualifiers and earn
valuable WPBA Regional Tour Points which count toward earning invitations to the prestigious WPBA
Regional Tour Championship and WPBA Pro Events. WPBA Regional Tours host WPBA State
Championships,