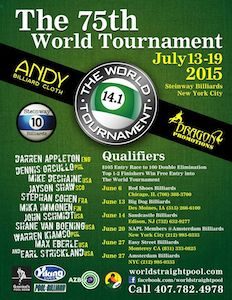 For the 10th year in a row, qualifiers will be held nationwide for the 75th edition of The World Tournament of 14.1. Each qualifier winner will be guaranteed a minimal of 6 round robin matches in the finale main event. The main event will take place once more in New York City.

Dragon Promotions said they are “pleased to keep the oldest billiard event in the world alive with the 75th production on July 13th-19th, 2015. As usual, a star studded field is expected this year at Steinway Billiards Cafe, who is once more hosting this world class event”

“It may not be the most financially rewarding production we put on, but it is definitely one of the most spiritually rewarding events we do because of the enthusiastic support of the players and fans. Being the caretakers of one of pool’s most precious gems is something we take seriously and have come to enjoy”, said Cindy Lee, CEO of Dragon Promotions who has overseen the World Tournament for a decade now.

“I get excited each year to see what new players qualify for the Worlds. Those players are always so wide-eyed and thrilled every moment to be there, and I guess I feel the same emotions vicariously through them! But each and every player in the qualifying heats are also part of the overall World Tournament experience. It’s the only major tournament in the United States that has a major organized qualifying system. Which is a credit to the prestige of the title. Straight pool is the father of all games, so it’s understandable that this is one of the most looked forward to events of the year for pool enthusiasts”, says Charlie Williams, Executive Producer of the World Tournament.

• June 6th Red Shoes Billiards Chicago (708) 388-3700 – The first qualifier kicks off this weekend, making it 9 years in a row for Red Shoe Billiards in Chicago, Illinois. Room owner John Lavin and 14.1 supporter extraordinaire Dennis Walsh will be running the show. 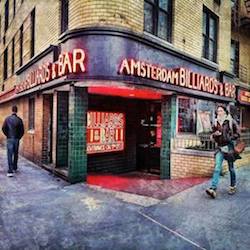 Amsterdam has been a huge supporter of the World Tournament of 14.1 from the start of its resurrection in 2006 and has held a qualifier every year for 10 years straight, giving them the distinction of being the only billiard room to do so. This has all been due to the enormous generosity of Greg Hunt, owner and founder of Amsterdam Billiard Club since 1989. The iconic Amsterdam Billiards has been an industry leader in billiard rooms worldwide for 26 years. 21 players have qualified for the World 14.1 here including last year’s Jonathan Smith and Hunter Lombardo.