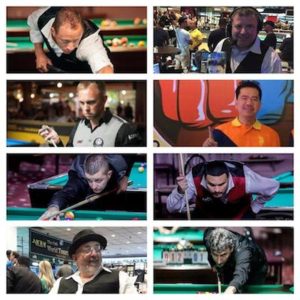 The big goal on Tuesday was to secure a place in the double elimination phase, which begins on Thursday, and several of the big names did just that, as we’ll see in the group summaries below. For those less fortunate, they will be depending on winning their final match in today’s light schedule (most are playing only one match), someone else’s losing, a tiebreaker, or some combination of these events. While the mathematical possibilities are substantial in several groups, some of the stronger players are so heavily favored that we can, in most cases, forecast who is going to advance.Here a few of the highlights from Tuesday’s play: Johnny Fulcher was at -3 in his match with Danny Harriman when he ran 103 and out to claim the high run so far in the round robin phase. Warren Kiamco ran 100 in handing Thorsten Hohmann his only loss. Tony Robles ran 70 in beating Ron Dobosenski, then thrilled his legion of fans on the TV table with a run of 69 and out against Jayson Shaw.Mika Immonen was on the verge of losing his third game, which would have ended his title hopes, after Elliot Eisenberg staged a big comeback with a run over 60 balls to reach 87. But Eisenberg, a superb shotmaker, missed an easy shot and the Iceman ran out to remain in the hunt for a berth in the final 24.Below are the records after the first two days of play. Groups 1, 3, 5, 6, and 8 are all but set in stone. In Groups 2, 4, and 7 there is still a question as to who will advance.TODAY’S FEATURED MATCHES
Group 2: Fulcher vs. Hernandez (3:00pm)
Group 4: Davis-Scharbach (1:30pm)
Group 7: Gomez vs. Johns (3:00pm)ROUND ROBIN
GROUP 1
Lipsky is favored to beat James Landrum (10:30am), so he should advance along with Appleton and Strickland.
Darren Appleton – 5-0
Earl Strickland – 4 – 1
Steve Lipsky – 3 – 1
James Heller – 2 – 3
Bob Cozzolino – 1 – 3
James Landrum – 0 – 3
Tom Gleich – 0 – 4

For additional information and for the live stream –  CLICK HERE