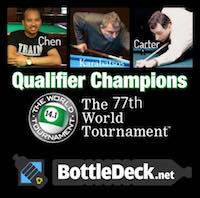 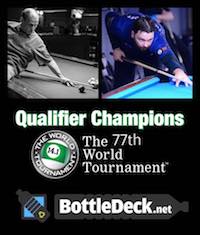 Jeff Carter, a former top ranking pro that had finished 2nd place at the 1990 World 9-Ball in Gemany, entered his first World 14.1 Qualifier and succeeded with only a loss to Tom Karabatsos who has won numerous qualifiers in the past 12 years. NYC’s Jonathan Smith also won his 10th qualifier in 12 years with newcomer Del Sim getting the second spot. Rhys Chen originally from Jamaica won his first qualifier at the NAPL organized event.

A few spots have opened for players interested in playing the historic World 14.1. Every players is guaranteed 5 matches. Reply to the email or call 407-782-4978.

Along with that news, the Official Website for the event has been re-vamped and re-launched as TheWorldTournament.com ! Checkout the latest news and features.WorldStraightPool.com also still connect to the site.