Fifty-two players set a season high attendance the weekend September 19-20th at Slick Willie’s Family Pool Hall in Austin, TX to support the OB Cues Ladies Tour and remember the loss of a local Austin OB player, Emma Stewart-Davis. This was the second year for Slick Willie’s to host the ladies event and we were very happy to be back at their excellent establishment. A very big thanks goes out to Rob Mercado for accommodating the OB Ladies again on this weekend of pool and remembrance.

Sunday rounds were scheduled to start late to allow players time to attend the memorial celebration for Emma Stewart-Davis in Elgin that morning. Emma began playing on the OB Cues Ladies 9-Ball in 2013 and quickly became a positive force on the women’s tour. Her kind words of encouragement and laid back attitude helped players feel at ease. Though she played just a few short years on the tour, she was so open and warm, that she made a mark that will last for years. Her mother said it best about Emma, “She was beautiful when she opened her mouth” – her beauty was both external and internal in the loving way she treated everyone she met. She will be deeply missed by all the players and spectators of the events. Our thoughts and prayers go out to her husband, James Davis, Jr, her son, James Davis III, her family, and all of those whose life she touched during this difficult time. 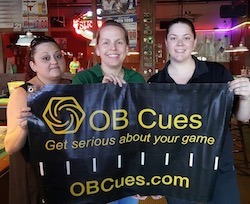 After a late run on Saturday night, fifty-two players were reduced to eight ladies returning on Sunday afternoon. The final two remaining in the winner’s bracket were Ricki Casper and Tara Williams. The six ladies returning on the one loss side were Amanda Lampert vs Terry Petrosino, with Sheri Palma-Jones awaiting the winner and Kim Sanders vs. Kawania Watson, with Jennifer Kraber awaiting the winner. Placing in the money, but not returning to Sunday, were the 9-12th finishers: Marilina Nieves (San Antonio), Tam Trinh (Austin), Kari Grant (Austin), and Natalie Mans (League City).

Eliminated first round Sunday morning at the 7/8th positions were Kawania Watson of San Antonio and Amanda Lampert of Frisco. Kim Sanders of Leander and Sheri Palma-Jones of San Antonio finished in the respective 5/6th positons. Jennifer Kraber of Austin took the 4th place position.

Ricki Casper of Houston made her way through Saturday with wins over Rachel Hurst (7-3), Kim Sanders (7-4), Amanda Lampert (7-4), Kari Grant (7-2), and Sheri Palma-Jones (7-4). On the other side of the winner’s bracket, Tara Williams of Fort Worth was making her way through her Saturday matches. She posted wins over Michelle Cortez (7-4), Darcy Durham (7-3), Barbara Wisdom (7-3), Tam Trinh (7-6) and Jennifer Kraber (7-3).   In the hot seat match on Sunday, Tara got ahead early in the match against Ricki and didn’t look back. Tara showed solid play in the match with several run-outs, finishing the match with a score of 7-1.

For the 3rd place match, Terry made her way through six matches in the one-loss side before facing Ricki, to see who would come out ahead to face Tara in the finals. Just like in the last tour event for this round, Terry was an unstoppable force in this match. She kept control of the match the entire time and was able to secure her spot in the finals with a 7-2 win over Ricki. Congratulations to Ricki for her great play all weekend and for her highest finish to date on the tour!

Terry Petrosino of Houston secured her second spot in the finals in two events and was poised to take on Tara Williams. Just like the last event, she was coming through the one-loss side and needed to win two sets against the current tour champion to win the event and the $770 first place prize. She once again jumped in the lead to get ahead 4-1, but Tara worked to close the gap at 4-3. A few missed opportunities allowed Terry to once again pull ahead again in the match. Tara continued to fight her way to keep it close, but Terry was determined to close the first set out and managed to grab the first set with a final score of 7-5. Both players regrouped and came back to the table ready to have one set determine the winner. This time, Tara controlled the match, getting ahead quickly, but this time it was Terry clawing her way back into the match. Tara once again dug deep to gain a firm lead and was able to close out the final set with a score of 7-4 and take the win. Congratulations to both ladies for another great tournament! With this fifth tour stop win of 2015, Tara Williams breaks another OB Ladies Tour record by becoming the only player to win five stops within a calendar year. She also secured her 2015 Tour Championship with this event, becoming the fourth player in tour history to win the Tour Champion award in consecutive years.

(Special recognition by Tournament Producers – “Thanks to OB Cues our main tournament sponsor. If you want to get serious about your game, check out OB Cues at www.obcues.com. Also many thanks and love to all our families, fans, supporters—we greatly appreciate each and every one of you. Also to the many, many ladies/ players/friends who traveled from near and far; we loved seeing you all again and greatly appreciate you making the journey to play on the OB Cues Ladies Tour. We look forward to seeing everyone once again at Stop #7 and the tour championship stop at Rusty’s Billiards in Arlington, Texas, November 7-8th weekend. Check us out at www.obcuestour.com or stay up to date with instant news by adding us on Facebook/obcuestour”)