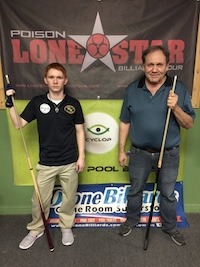 On January 7th-8th, 2017, Bogies Billiards and Sports Bar (Houston, Texas), along with tour title sponsor Poison by Predator Cues PoisonBilliards.com, and sponsors Cyclop Pool Balls facebook@CyclopPoolBalls, Ozone Billiards OzoneBilliards.com, and the APA of North Harris County facebook@APANorthHarrisCounty, facilitated another successful Poison Lone Star Billiards Tour event, procuring a generous $1,000 in added money, with eighty players in attendance, and a near $7,000 prize fund. Due to the overwhelming number of players, races were reduced in each division, on the second day. 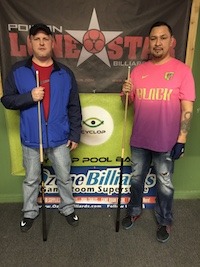 In the open 9-ball division, Clint Freeman made his way into the final four on the winners’ side, taking down Bob DeTuncq, Jay Russell, 9-2, Michael Pickering, 7-6, and Justin Whitehead, 7-6, while Eduardo Hernandez bested Karol Hughes, Paul Bojan, Ruben Bautista, 7-4, and Scott Proud, 7-5. Manny Chau came on strong with wins over Elias Garza, 9-3, Thomas Madison, 9-6, Sonny Bosshamer, 7-5, and Steve Lenz, 7-3, while Ernesto Bayaua ran through Alan Myers, 9-2, Adam Cooper, 9-4, Steve Espinosa, and Leon Contreras, 7-4. As the final four on the winners’ side took shape, the one loss side witnessed a comeback by Bautista, who won five consecutive matches including wins over Jacob Watson, 7-1, Steve Williams, 7-1, and Steve Lenz, 7-3. Also on the one loss side, Michael Pickering ended Yoko Joe, 7-5, Cesar Arechiga, 7-4, and Leon Contreras, 7-3, to meet Bautista. Louisiana’s own Robley Fontenot made an impressive run on the loser’s side with wins over Chad Hart, Angel Cerrillo, 7-4, Steve Espinosa, and Danny Roland, 7-6, until Whitehead ended his run, 7-1. After losing his first match to Grady Cooper, David Leal won five straight matches, with wins over Myers, 7-6, Dale Lairamore, Russell, 7-3, Ricky Hughes, 7-6, and Doug Gray, 7-3. Leal was halted by Proud, just shy of the final eight. On the east side, Freeman ousted Hernandez, 7-2, and Chau sent Bayaua west, 7-1. Freeman went on to defeat Chau for the hot seat, 7-4. Back on the east side, Bautista forged ahead, eliminating Pickering, 7-1, and Hernandez, 7-0. Whitehead made quick work of Proud, 7-3, but fell to Bayaua, 7-2. Bayaua ended Bautista’s run, 7-6, but lost to a determined Chau, 7-1. It was evident that Chau was on a mission, and Freeman had his work cut out for him. Following an unforced error by Freeman, Chau closed out the first set, 7-5. In overtime, it was a fight to the finish, as both players traded game for game, each waiting on the slightest mistake in order to pull ahead and win the set. After a near flawless second set, when the dust cleared, it was Freeman who inched ahead to win the race, 7-6, and secure his first open 9-ball division title.

There were a number of players who traveled from out of state to participate in this event, and players competing on tour for the first time. The tour would like to thank all those players for making the trip, and those who competed in their first Poison Lone Star Billiards Tour event. We hope to see you back at every opportunity.

The tour would like to recognize its 2017 sponsors and venues: Poison by Predator Cues, Cyclop Pool Balls, Ozone Billiards, and the APA of North Harris County. This year, the tour welcomes back Texas venues Bogies Billiards and Sports Bar (Houston), Bogies West (Houston), Skinny Bob’s Billiards (Round Rock), and our brand new venues, Fat Racks Sports Bar and Billiards (San Antonio), and CK Billiards (Dallas). This year the tour welcomes its new, resident vendor, Bryant Billiards, and will offer cue repair at each of its 11 stops.
Without the nearly 300 players who attend Poison Lone Star Tour events, annually, production of this tour would not be possible. The tour would like to thank each and every player for their participation, whether it’s one event, or every event year round. It is because of your patronage, that the Poison Lone Star Billiards Tour celebrates its 9th birthday this year, serving players across Texas and in surrounding states. The tour welcomes everyone back for the next event, to be held on February 11th-12th, 2017, at Bogies West, located at 9638 Jones Road, in Houston, Texas. The full 2017 schedule is published at www.LoneStarBilliardsTour.com. The Poison Lone Star Billiards Tour encourages everyone who loves to play pool and compete in a friendly atmosphere, to attend an event. “Like” us on Facebook @LoneStarTour and “Follow” us on Twitter @LoneStarTour09.