(CueSports International, Henderson, NV Aug. 27, 2016) — Rebecca Wagner of Las Vegas had the hometown advantage and made the most of it, earning the Women’s 8-Ball, Women’s 9-Ball and the All-Around Titles at the 2016 US Bar Table Championships at the Westgate Hotel & Casino in Las Vegas. 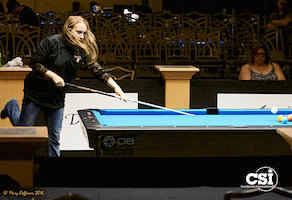 Not bad for a woman who has only played one tournament since having her son, Lincoln, in October.
“The only tourney I played was an AWB stop and I won that,” she said.

In fact, Wagner was so unsure about playing the USBTC that she waited until the very last minute to enter. She was at work and asked a co-worker to cover for her so she could go to the bathroom and enter the tournament 18 minutes before entries closed.

“The (USBTC) is in my backyard, so I felt stupid not playing,” she said, even though she was not prepared and hadn’t been practicing.

Wagner, who is sponsored by Tony Hargain, owner of Hustlin USA Clothing Co., used her experience on the table to send opponent after opponent to the loser’s bracket. She beat Heather Cortez in the first round, 4-1, and followed that win up with wins over Bo Bowman, 4-1; Kimberly Whitman, 4-2; Tina Larsen, 4-1; and finally beating Jessica Frideres in the hot seat match, 4-1. Frideres beat Juliana Goodman, 4-0; Sierra Reams, 4-0; and Melinda Huang, 4-0; in the winner’s bracket before losing to
Wagner, 1-4. In the loser’s bracket, Frideres beat Tina Larsen, 4-1, to earn her way back to the final’s arena.

In the true double-elimination tournament format, Frideres had to beat Wagner twice and she knew it, jumping out to capture the first set quickly and decisively, 0-4. But in the second set, Wagner played smart and careful, keeping Frideres from the table and an opening shot as often as possible. The strategy worked and Wagner finished Frideres off in the second set by a score of
4-2.

Wagner said her only regret in the tournament was not playing better in the 10-Ball Division, where she placed second to
Frideres. “I did not capitalize on the opportunities given to me in the 10-Ball,” she said.
Sponsors include: OB Cues, the Official Cue; Kamui, the Official Tip; Diamond Billiard Products, Cyclop Balls, Simonis Cloth,
BadBoys Billiard Productions, FargoRate, Magic Ball Rack and Matchroom Sport.

(The 2016 US Bar Table Championships are produced by CueSports International, the parent company of the BCAPL and USAPL. CSI also produces independent events, such as the US Open 10-Ball Championship, the US Open 8-Ball Championship and much more. For more
information, visit www.playcsipool.com or call 702-719-POOL.)