August 22-23 were the dates for the largest women’s pool tournament in Southern Oregon. Viking Cues was the title sponsor for this championship. They donated a cue worth approximately $600, and $700 was raised in ticket sales. Rack ‘Em Billiards in Medford, OR was the location and provided the ladies with the best equipment (7 Diamond bar boxes), the best food, and the best hospitality. Owner Dave Smith added $500 to the tournament, provided crystal trophies for 1st-3rd places, and loaded a coffee card at the nearby Starbucks. 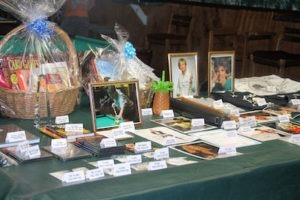 Top Players Contributions included: Robin Dodson gave Jump Shot videos, Ewa Laurance, Keith McCready, LoreeJon Hasson, Allison Fisher, and Emily Duddy sent autographed photos. Other personally signed pictures came from Mary Kenniston who also donated a cue extender, Florian Kohler who also contributed his Venom 2 DVD and a cute chalk keychain, Darren Appleton who also gave us one of his training videos, Charlie Williams donated a guest pass to every 2016 Dragon Promotions event, including the World 14.1 Championships, Nick Varner, gave a Nick Varner signed cue, John Schmidt autographed photos, a Fury cue case, and 5-DVD sets of his highest straight pool runs. Vivian Villarreal gave an “I Bank for a Living’ T-shirt, Tony at Hustlin gave apparel signed by many pros, and a Hustlin towel. Tim Miller, aka The Monk, contributed books and videos and training tools. Marney Teague 8-ball jewelry – necklaces, earrings, bracelets, and a keychain. Amber Surgeon made huge baskets with all kinds of goodies. Producer of the event, Linda Carter said “We also gave away 2 hotel stays for 3-days and 2 nights” and “Thank you to all for your generosity!”

Linda continued, “Frank at Play the Game Clothing Company designed and embroidered some awesome shirts in 3 styles, just for our tournament, which many of the players wore. The profits from the shirt sales came to $100, which went towards the prize fund, as did another $100 that came from NW Player’s League in WA. Altogether, we had $1400 added, and we gave $200 to the Consolation tournament on Sunday.

“Tournament Directors Paul Kinney and Roy Johnson kept the tournament running smoothly, and Ken Smith was our official referee. Many thanks to them, and Bob and Audrey Neill and Tristen Tartaglia for serving everyone with a smile, and keeping the players happy. Roland Daniel was our official photographer that took the photos on Saturday, including our group photo.

“An earlier newspaper article announcing this tournament brought out several spectators that came out just to watch and root for their favorite players.”

The cream definitely rose to the top, as the favorites, Kim Jones from Seattle, and Cindy Doty from Kelso, WA came in 1st and 2nd. Kim’s journey to the finals began with a bye, then she bested Vickie Anders and Dena Hunt Sherman from Medford, Cindy Doty, and then Linda Carter for the point match. Cindy had wins over Raquel Walton of Portland, Jamie Bird from Eugene, and Patty LaMontagne from Grants Pass, before she succumbed to Kim. On the B side, Cindy tore it up against Kris Robbins of Medford, Liz Jensen of Portland, and Linda Carter of Medford, who had just lost to Kim for the point.

All entrants got at least one door prize, and on Sunday at 3 pm, we drew for the Viking Cue raffle. Roy Johnson won the cue, and Gary Peyton of Grants Pass won the Fury cue case supplied by John Schmidt.

Linda added, “The Consolation tournament was a 2nd chance for those out of the money and the main tournament to prove their stripes once again, with only a $5 entry. Thirteen women chose to come back and battle it out for the $200 added on Sunday. Lauren Ward from Long Beach, CA came out on top, winning $100, with Natasha Hook from Wilsonville coming in a close second, and taking home $75. In 3rd was Linda Knight from Medford, cashing in $55, and Cecilia Holloway from Yreka, CA rounded out the winners and 4th place, bagging $35.

“It seems everyone had a super time and wants to come back for our next tournament. It was a fun tourney with lots of great ladies participating. All of us at Rack ‘Em thank you for your efforts in putting together a great tournament!”