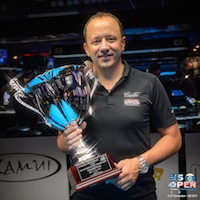 CueSports International, Henderson, NV (July 19, 2017) — Shane Van Boening once again proved to be an indomitable force as he plowed through a tough international field to capture his second consecutive US Open 10-Ball Title.
The sponsors for the US Open 10-Ball and 8-Ball Championships are Predator, Omega Billiards, Cyclop, Kamui, the Rio All-Suite Hotel and Casino and Simonis.

Van Boening said his hard work in preparing for the tournament, which was a much different format than lastyear’s. This year, CueSports International, which produces the US Open 10-Ball and US Open 8-Ball Championships, returned the prestigious tournament to 9-foot tables. This year’s field was packed withinternational stars, including players from Greece, Germany, Qatar, Poland, Austria, Kuwait, and, as always,the Philippines.
“My hard work, my breaks, helped me succeed to win in this very tough field,” Van Boening said.Van Boening was undefeated going into the finals. He posted wins over: Danny Stone, 9-4; VinnieCalabrese, 9-4; Ralf Souquet, 9-6; Lee Van Corteza, 9-7; and Warren Kiamco, 9-4. He beat Kiamco 11-Kiamco’s beat Molrudee Kasemchaiyanan, 9-1, Denis Grabe, 9-7, Vilmos Foldes, 9-8, and Alex Pagulayan,9-3, before losing to Van Boening, 4-9. Then he beat Roberto Gomez 9-7 to gain a spot in the finals.

The 2017 US Open 10-Ball & 8-Ball Championships are being held in conjunction with the 41th BCAPLNational Championships, July 19-29 at The Rio All-Suite Hotel & Casino. The event will feature more than 5,000 amateur players representing 47 states, nine Canadian provinces and 11 countries, competing in approximately 40 divisions, on nearly 300 Diamond pool tables. The annual tournament will also include about 50 exhibitors.

Many of the professional players will also participate in the 9-Ball, 10-Ball, and 8-Ball Challenges, which are open to all and are part of the 2017 BCAPL National Championships.