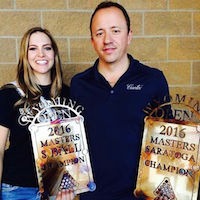 Miss Wyoming Autumn Olson awards the 2 champion’s trophies to Shane Van Boening
(Saratoga, Wyoming) South Dakota’s young gunslinger Shane Van Boening took the lion’s share of the pro dough once more as he won back to back WY Open pool titles in Saratoga  and 8-Ball. He defeated Corey Deuel in the Saratoga finals, and Mike Massey in the 8-Ball finals. The full field of 32 pro class and semi-pro class players competed in a single elimination format which were to be the first of 3 pro open events. In it’s 9th straight year, the 2016 www.AndyClothUSA.com Wyoming Open is a 3 day Rocky Mountain pool extravaganza taking place on April 1-3, 2016.  The event is sponsored by widely popular Andy Cloth with local partners include Duke’s Bar & Grill, the Hotel Wolf & Restaurant, and the Riviera Lodge with all events coordinated by Shively Hardware. In addition, the livestream table will be Rasson Billiards premiere in the Rocky Mountains and streaming by www.OntheRailTV.com .

In the Saratoga Masters, a game that combines 8-Ball and 9-Ball together, it was Corey Deuel who once again whizzed through to the finals with big wins over Van Boening (SD), Marc Vidal (SPN), Hundal (IND) to stay ready in the finals. Not a huge surprise that he would re-match with Shane after SVB sliced through the 1 loss bracket over Rodney Morris, Chris McDaniel, Johnny Archer, Marc Vidal, Raj Hundal. SVB would not be denied as he regulated Deuel to his 4th second place finish in 2 years with a 7-3 finals score.

“I should be promoted as the last loser trophy”, said Deuel good naturedly. Deuel has finished runner-up 4 times now at the Wyoming Open events. 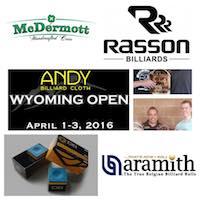 In the Masters 8-Ball, Van Boening cruised to the finals with wins over  New Mexico’s Tommy Najar, Wisconsin 14.1 ace Ron Dobosenski, and a thrilling semi-finals hill-hill 6-5 win over fellow multi-Wyoming Open winner Rodney Morris (CA) where many people said was the best match of the tournament. Morris actually led 5-4 on the hill first, before Van Boening made his move to win the next 2 games. On the other side of the bracket, 8x World Trickshot Champion Mike Massey the “Tennessee Tarzan” had a flashback with wins over Mike Curby (WY), Raj Hundal (IND), Adam King (CO), and then an exciting win over fellow Hall of Famer Johnny Archer (GA) in the semi-finals. In the finals, it was all Van Boening as he jumped to an early lead and never looked back in a 6-2 finale. Still a great performance from the 69 year old Massey, his first finals in an open pro field in a decade.

“Have to admit it felt really good to beat Raj and Johnny. 8-Ball on a barbox has always been one of my best games”, said Massey. 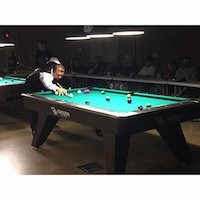 The action stayed hot as well on the amateur side with Derrick Pacheco and Seth Krafczik playing a very high level break and run finals of the Expert Division. Seth was undefeated putting Derrick on the losers side, but a re-match in the finals told a different story with Pacheco winning both sets to claim the Wyoming Open title in that division.

The first ever Wyoming Open Women’s division took place and saw women from Colorado, Florida, Texas, South Dakota, and Wyoming come to take the title. Anita Smith took the hot seat with a win over local favorite Jana Thompson. Jana eliminated Lora Jimenez of Cheyenne who settled for 3rd, while Jana and Anita made for an all Wyoming finals. Thompson was on her game as she won the first set 3-0 in the 8-ball event, and forced a second set. Jana took the second set 3-1 to become the first woman to ever hold a Wyoming Open title and the coveted metal trophy.

The Wyoming Open State Junior Championships saw 32 juniors come from all over the region. The winners receive a spot into the USA nationals held by the Billiard Education Foundation. Results will be on their site soon. “It’s great to see all the fields including the Master’s divisions all filled. I’m most pleased with the Expert division that we started 2 years ago doubling in size now. That division didn’t exist before, but now we created a successful model for the players that are very advanced and getting ready for the move to the Masters”, said Mayor Ed Glode who has organized the event for 9 straight years.  Results of all the divisions are below: 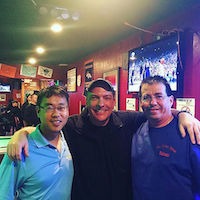 Order Andy Cloth today by calling 307-710-1447   and Like Andy at www.facebook.com/andypoolcloth   . Official Products used during the Wyoming Open. For more info and to follow the WY Open goto www.facebook.com/wyomingopen – visit www.wyomingopen.com . The Wyoming Open is the only event in the Rocky Mountains where fans and players in the region can rub shoulders with the biggest stars of the game 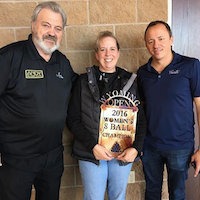 Past champions of the event include some stellar names. Visit wyomingopen.com to see the complete list.

For more info or to play in the Wyoming Open contact wyomingopen@gmail.com or call 307-329-8924

Andy Cloth was founded in 1973 and has become one of the premier professional playing cloths in the world today. AndyCloth USA is based in Saratoga, Wyoming and has quickly impressed critics and professional players worldwide. Andy Cloth is used exclusively in major international events such as The Queens Cup, Women’s World 9-Ball Championship, USA’s 103 year old World Tournament of 14.1 , The China Open,The BeijingOpen,  the International 10-Ball Championships in Philippines, the Wyoming Open, the High Desert Shootout, the Women’s International Pool Championship, and many more. Andy Pro Tour Cloth is specially designed for the American pool player market. It is engineered for weather conditions, longevity, ball reaction, and speed. It is the most superior professional performance playing surface on Earth. Visit www.andyclothusa.com 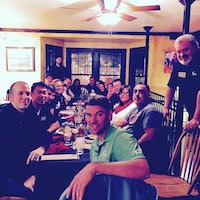