Now headquartered in Berkeley, California, the USSA announced the 2015-2016 edition of the popular “USSA National Snooker Tour.” Each event is open to any individual player except for professional snooker players competing on the World Snooker Main Tour; however players must be a member of their respective national snooker governing body or alternatively non US-players can become an associate member of the USSA for a $10 annual membership fee paid onsite at their first event.

The expanded, record 16-stop Tour began in October with local Raymond Fung capturing the inaugural Tour stop at the New 147 Snooker Club in Brooklyn, NY, and is continuing with stop #2 at the Prince Snooker Club, also in Brooklyn, with a handicapped tournament – the $300-added Prince Snooker Classic, November 21-22; followed the next weekend by stops in Houston TX and Redmond WA! Sponsors of the Tour include Aramith, Tweeten and Sterling Gaming. 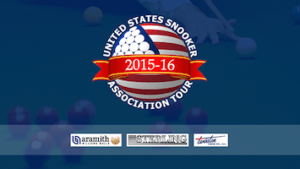 If your establishment contains two or more 6 x 12 snooker tables and would like to host an event on future USSA National Tours, or if you would like any further information about the USSA, please call 1-920-662-1705, email alanmorris@snookerusa.com, or visit the USSA official website at www.snookerusa.com. Details for each event are being posted on the USSA website.

The United States Snooker Association (USSA), established in 1991 in Chicago, Illinois, is the non-profit governing body for the sport of snooker in the USA as recognized by the International Billiards & Snooker Federation (IBSF), the world governing body of non-professional snooker.  The United States National Governing Body for Snooker as recognized by the
International Billiard & Snooker Federation –