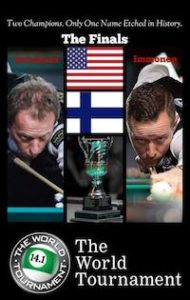 USA vs Finland: Strickland vs Immonen for pool’s World 14.1 Title

Strickland at 55 years old may become one of the oldest players to ever win the World 14.1. He also impressively holds the event high run of 135

New York City- The last two men standing at the end of 6 days of 14.1 playing are Finland’s Mika Immonen and USA’s Earl Strickland. Both have had rocky, challenging journeys to the finals at the AndyClothUSA.com World Tournament of 14.1. Both men have a unquenchable thirst to see their name etched in history as World 14.1 Champion.

Strickland played amazing to defeat John Schmidt 200-18 and led at the start of his semi-finals with Shaw. Shaw came back to take the lead in the later stage, but scratched on a run and needing only 13 balls. Earl came back from behind to win the match despite a controversial shot where Earl played an obvious shot but mistakingly called the wrong number in the final rack in his 200-187 victory.

In a smoother match, it was Mika Immonen defeating Lo Li Wen of Taiwan 200-114 in a stamina battle. Lo looked fatigued with his earlier battle with Thorsten Hohmann, while Mika seemed on point making much fewer errors than his match the day before.

“This title is very important to have. And having Pete Margo commentating the finals is a huge honor. Third time’s a charm!”  said Immonen.

“Straight pool is the greatest game in the world. I hae a tremendous amount of respect for the players who have won this title because this game demands so much of you”, said Strickland.