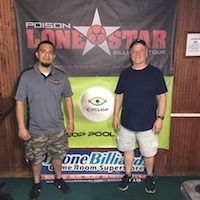 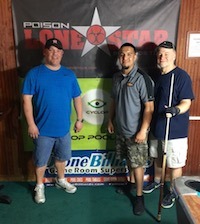 Torres bested Brian Rosenbaum, 7-4, in the first set of the true, double elimination final, to claim his first-ever, tour victory. In the amateur 9-ball division, Pete Charles found himself face-to-face with J.C. Torres in the final match, who had the opportunity to do what only one player has accomplished in the 9-year history of the Poison Lone Star Billiards Tour; win both divisions at the same event. Unfortunately for Torres, an undefeated Charles took the first set, 5-3, along with Torres’ chance to break the 9-year record.

Open and amateur 9-ball division action kicked-off Saturday afternoon, and brought back the final 16 on Sunday. In the open 9-ball division, Eric Charlton was on his way with wins over Viet Do, 7-1, Justin Pena, 7-6, and Matt Cash, 7-0, while Pete Charles defeated John Newsome, 7-2, Bobby Perez, 7-5, and Justin Pena, 6-4. Steve Williams bested Brian Rosenbaum, 7-5, Jesus Sorto, 7-4, and Jerry Cook, 7-3, while J.C. Torres ousted Chuck Adams, 7-1, Aldo Rosso, 7-1, and Yogi Salinas, 7-1. On the one loss side, Rosso was eliminated by Cash, and Rosenbaum blew past Justin Pena, 7-4. Final four winners’ side action witness Charlton defeat Charles, 7-4, while Torres overcome Williams, 7-5. The hot seat match was a hill-hill thriller, with Torres capturing his first hot seat win in the open division, 7-6. On the west side, Williams eliminated Rosso, 7-4, and Rosenbaum ended Charles, 7-2. Rosenbaum went on to defeat Williams, 7-3, and Charlton, reaching his first open division final. Both Torres and Rosenbaum were vying for first-time wins, and following a grueling day of match play, both players were feeling the strain. They traded game for game, until Torres pulled ahead to close the set, 7-4, winning his first Poison Lone Star Billiards Tour division title!

In the amateur division, Pete Charles logged wins over Erik Renteria, Shane Thompson, 5-2, and Yogi Salinas, 5-1, while Steve Williams ousted Chuck Adams, 5-0, Jimmy Jenkins, 5-1, and Jerry Cook, 5-2. Bobby Perez came on strong with wins over Kane Thompson, 5-1, Matt Cash, 5-3, and Bill Fuller, 5-4, while J.C. Torres defeated Thomas Madison, 5-3, David Taylor, 5-3, and Eric Charlton, 5-2. As the final four on the winners’ side took shape, the one-loss side was heating up. Reaching the final four on the one loss side, Charlton eliminated Chris Rocha, 5-4, while Justin Pena ended brother, Jacob Pena, 5-4, and Fuller, 5-2. Newcomer Jesus Sorto dominated Aldo Rosso, 5-2, but lost to Yogi Salinas 5-2. After losing to Fuller in the third round, 5-4, Rosenbaum found his rhythm, eliminating Viet Do, Matt Cash, 5-1, and Jerry Cook, 5-3. It was down to the final eight, and winners’ side final four action was underway. Charles took care of Williams, 5-2, while Torres dominated Perez, 5-0. Torres put up a tough fight for the hot seat, but was taken down by Charles, 5-3. Back on the west side, Pena eliminated Williams, 5-3, and Rosenbaum scored his fifth straight win over Perez, 5-3. Pena ended Rosenbaum’s run, 5-2, but fell to a determined Torres, 5-2. The final match was an all-too familiar scene for Torres, with Charles taking the lead following a couple of unforced errors. Charles closed out the final set, 5-3, clenching his second, Poison Lone Star Billiards Tour, amateur division victory.

Without the nearly 300 players who attend Poison Lone Star Tour events, annually, production of this tour would not be possible. The tour would like to thank each and every player for their participation, whether it’s one event, or every event year round. It is because of your patronage, that the Poison Lone Star Billiards Tour celebrates its 9th birthday this year, serving players across Texas and in surrounding states. The tour welcomes everyone back for the next event, to be held on May 6th-7th, 2017, at Skinny Bob’s Billiards, located at 300 Hester’s Crossing, in Round Rock, Texas. The full 2017 schedule is published at www.LoneStarBilliardsTour.com. The Poison Lone Star Billiards Tour encourages everyone who loves to play pool and compete in a friendly atmosphere, to attend an event. “Like” us on Facebook @LoneStarTour and “Follow” us on Twitter @LoneStarTour09.