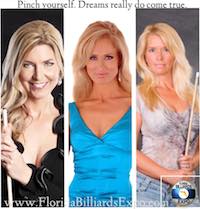 TODAY through January 31, 2016 pool’s 3rd Annual Florida Billiards Expo will offer pool fans around the world the Legends of Pool Experience! An escape from the winter cold and a chance to spend 3 days of pool lessons, golf, and meals while getting to know Hall of Famers Buddy Hall, LoreeJon Hasson, Jim Rempe, Joann Mason Parker, Ray Martin, and Ewa Mataya Laurance on a very personal level.

The six champions will also for the first time be competing against each other in singles, mixed doubles, and a sizzling special Battle of the Sexes 8-Ball match! The FBE takes place once again in the Villages, Florida. Formerly known as the “Billiards Expo in The Villages”, the Florida Billiards Expo will easily have over 1200+ attendees during the 4 days of the event. Activities include tournaments, the Legends Pro Pool School, Golf Pro-Am, Ladies Wine & Cheese Night, Dinner & Lunch with the Pros, free clinics, and the main event, the Legends of Pool Championship.

“These first ladies of the green felt have a deep, rich history with one another. Besides the numerous battles, you get a sense of genuine respect and admiration they have for one another” , said Charlie Williams of Dragon Promotions, Executive Producer of the events.

“I remember the first time I laid eyes on Ewa she was 17 years old and I was 15. It was at the Roosevelt Hotel in New York City. Not sure what the name of the event was”, said LoreeJon.

“The first time I met LoreeJon was at the World 14.1 in New York City. She was 16 and I was 17. She won the tournament, She was already a strong player”, said Ewa.

“Oh I’m terrible about remembering things like matches and records. I think me and Ewa played like 20 times or so. Overall it’s been pretty close, but I think I’m ahead slightly”, says LoreeJon.

“LoreeJon and I must’ve played over 40 times. She beat me a lot before 1990. After 1990 I became a stronger player and I won a lot against her after that. Overall, our records are really close. But of course if I had to pick, I think I’m ahead!”, said Ewa.

“I only beat LoreeJon once, and that was at the US Open. I beat Ewa in the finals”, said Joann.

“I had a really good record against Joann for some reason”, said LoreeJon. ” I really liked Joann’s attack on the game.  When I think of her in pool, I think of a fierce lil beast. The strut and sidearm stroke with the serious face. She cracks me up when i see her in that mood. If you don’t know her, she can be very intimidating by her appearance on the table.”

” Joann was fiery. You never knew what she was going to do. Very confident, and always strutted around the table”, said Ewa.

“I always admired both of LoreeJon and Ewa. Both beautiful, talented and very successful women. I’m so honored to be playing with them again at the Legends of Pool. It’s going to be a lot of fun!”, said Joann.

” I’m looking forward to playing doubles with Buddy. He was my absolute favorite player to watch. My mom was more mesmerized by Buddy Hall. She flipped out. He was so steady and such a perfectionist and made it look so effortless. So fun to watch. She couldnt care less about pool, was so unathletic, but followed Buddy around the tournament. I think she may have had a crush on him. Haha! “, said Ewa.

“Ewa has a heart the size of the freaking world! She never gives up. OMG. She digs so deep. You can a great player, but if you dont dig deep you cant win. So many times when I saw her dead completely in match, and she would come back and win”, said LoreeJon.

“LoreeJon was so very steady. She has a beautiful stroke. She started so young so it was such a natural stroke. No matter what the score she would always fight from behind and you would never see her technique falter. All that knowledgable from growing up playing straight pool”, said Ewa.

All 100 VIP seats have already been sold out with only general admission remaining for the 4 available sessions of the Legends of Pool Championship. Tickets can be purchased in advanced at (352) 753-3229. Most of the amateur tournaments have also been filled to capacity.The 2017 Florida Billiards Expo next year will be exponentially larger than this year’s.

Who has the best cueball? Who’s mom had a crush on one of the Legends? Who has the best strut around the table? These are just some of the answered questions the ladies chatted about in the upcoming Legends of Pool Championship this weekend at the 3rd Annual Florida Billiards Expo . A quarter of a century in the making, some of the most legendary stars of the game are reunited for the first time in decades…and fans can join them for a weekend reunion! MORE Info at www.FloridaBilliardsExpo.com