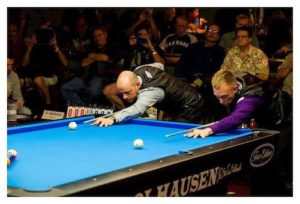 Appleton on the left, Homann on the right
In the 5 hour and 45 minute contest to determine the winner of the 2015 Andy Cloth World Tournament of 14.1 (Steinway Billiards-Cafe, Astoria NY, July 13-19), Thorsten Hohmann (sponsored by Cue & Case and Lucasi Cues) won the first and last acts o the Double Elimination contest and Darren Appleton won the second. Here is how it all unfolded:
ACT 1
Hohmann won the lag, Appleton left him with an open shot, and Thorsten ran 54 before missing a softly hit shot using inside english, ending his hopes for a run of 300 and out. Appleton replied strongly, running 59 before getting a bad roll on a break shot. His slim 5 ball lead was short lived as Hohmann went on a tear, running the game’s lone century, a 126 ball run that ended on the first shot after he opened the eleventh rack.
SCORE: Hohmann 180 – Appleton 59
ACT 2
At the 2 hour and 45 minute mark of this marathon match, the players took a 30 minute intermission, which was much needed on this very hot and humid Summer day in New York (the temperatures were in the 90s), and in the pool room. Appleton went to work, running 24 before act 2 briefly erupted into a comedy of errors. It started when Appleton suffered from an unexpected scratch in the side from an extremely sharp angle. Hohmann missed his first shot, but Appleton could only counter with 4 balls before he missed. After running only 13 Hohmann miscued. At this point the score wasAppleton ran 27, but missed position on a break ball and had to play safe. Hohmann countered with a very poor safety that had the commentators shaking their heads. Appleton then opened up with a run of 53 to narrow the gap to 53 balls at 193 – 140. Hohmann replied with a 17, but left himself with a very shallow angle on the break ball, and he missed his patented power break shot. Appleton could only run 14 before scratching on a break shot, but Hohmann failed to capitalize on this error as he only ran 6 before missing. The curtain fell on act 2 after Appleton ran 51 before missing a long rail first shot from the end rail. He now led, 231 to 216, after outscoring Hohmann in act 2, 172 to 36!
SCORE: Appleton 231 – Hohmann 216ACT 3
Hohmann woke from his mid-game siesta and went back to work, running 72 before missing a tough shot. He now led, 288 to 231, to pull to within 12 of victory. After running only 3 balls, Appleton was forced to play safe, but he left Hohmann with a long combo, and Thorsten pocketed it and ran 10 more to reach game ball. But it was a super tough back cut, and he jumped up and missed it badly. Appleton ran 11, but scratched on the break shot and conceded the game ball to Hohmann. The crowd erupted in applause for Hohmann, who had just won his fourth title in the World 14.1 Tournament.
SCORE: Hohmann 300 – Appleton 244RUNS OVER 50
Hohmann – 126, 72, 54
Appleton – 59, 53, 51ACT 1 – Hohmann 180 – Appleton 59
ACT 2 – Appleton 172 – Hohmann 36
ACT 3 – Hohmann 84 – Appleton 13