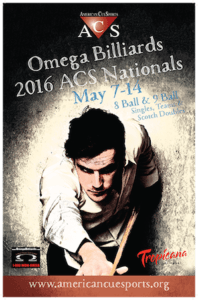 The ACS recently issued a press release saying, “The increase in BCAPL-sanctioned leagues and independent leagues choosing to dual-sanction or switch to the American CueSports Alliance (ACS) is due to the ACS Nationals being scheduled annually in the popular mid-May dates. (May 7-14, 2016 at the Tropicana Las Vegas.) The ACS Board of Directors has expanded the days for both 8-ball and 9-ball team play from three days to four (4) days – Wednesaday, May 11 thru Saturday, May 14, 2016

“In addition to the projected increase in attendees to the 2016 Omega Billiards ACS Nationals, the ACS is continuing to offer the following benefits to entries:
•20% “Early Bird” discount on entry fees submitted by January 31, 2016!
•Further discounted entry fees for all attendees staying at the Tropicana Las Vegas!
•The Tropicana is offering a further discounted rate of $81/week night// $132/weekend rates for the first 100 rooms reserved prior to January 31, 2016 ($88/$139 thereafter)!
•The $20/day “Resort Fee” is waived on all ACS hotel reservations using the online reservations CLICK HERE
•First-time 8-ball team attendees may solicit their respective ACS State Associations to gain $ credits covering entry to the 2016 ACS Nationals! *
•Every ACS league receives free “Standard 8-Ball Team” entries to the ACS Nationals in relation to the size of the league! **
•8-Ball Team Champions from the primary divisions of each ACS State Association receive free 8-Ball Team entry + plus 2 comped rooms for 2 weekday nights at the Tropicana!*”

The ACS said, “With a non-profit, member-governed structure emphasizing both superior customer service and keeping operations overhead low, the ACS rewards a larger percentage of its sanction fees in benefits back to its members than any other national billiard association.  Any billiard league may sanction or dual-sanction with ACS simply by paying the $10/player sanction fee.  All ACS leagues are also eligible to receive a free $299 retail-value league cue from Omega Billiards!  The ACS is a non-profit, national organization dedicated to heightening the interest and awareness of cue sports through the support and sanctioning of organized competition throughout the United States.”