Team Europe takes a 2:1 lead while the US team draws first blood 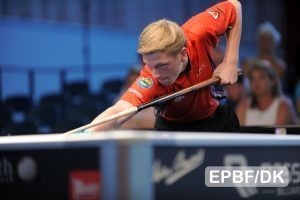 The first match was a line up with all six players of each team playing against one another. Team Europe had the far better start. After seven racks, the European were ahead 5:2, only needing one more rack for the victory and the first point in the event. But the US team stayed in there and fought their way back into the match. The tide turned in rack eight when Manny Perez (USA) ran out on Daniel Maciol (POL). That gave some momentum for team USA. They also won the following two racks and managed to tie that first match at 5:5. The decider was played between Shane Wolford (USA) and Wiktor Zielinski (POL). There, Zielinski broke end had the 1-ball down but he did not really have a shot at the 2-ball. He came up with a poor safety and allowed Wolford back into the table with a makable 2-ball. The US player pocketed the 2-ball and played perfect position for the next ball. With an open table in front of him, Wolford achieved the impossible and completed an amazing comeback for team USA to open their account at the ACC, taking a 1:0 lead over team Europe.

The next match was a triple match. Europe lined up Daniel Maciol (POL), Wiktor Zielinski (POL) and Diana Khodjaeva (BEL) against US players Shane Wolford, Nathan Childress and April Larson. Again, the Europeans got the better start and had a nice and comfortable 3:1 lead after 4 racks. It was again Wiktor Zielinski, the youngest gun on team Europe, who committed a mistake by playing a poor safety and allowing his opponent Nate Childress to rip the match from him, turning the score to 3:2 for Europe still. After that, April Larson tied the match for the USA to display 3:3. Would the European again receive a defeat after a comfortable lead like in the first match? This time, the European juniors were definitely against this scenario. They got their minds together and focussed on the match, winning three racks in a row when Diana Khodjaeva took the match with 6:3 and tied the overall score between Europe and USA at 1:1 for the day.

The third match of the day was also a triple. Europe was represented by Maksim Dudanets (RUS), Patrick Hofmann (GER) and Kristina Tkach (RUS). Their opponents from the USA were Ricky Evans, Manny Perez and Sierra Reams. This time, the US team took an early 2:0 lead over the Europeans. But team Europe was on fire! They took the next five racks in a row to get on the hill with an impressive 5:2 advantage. Rack eight was opened by German Patrick Hofmann. He opened the match with the 1-ball down but no shot on the 2-ball. Hofmann decided to go for a safety shot. Perez went for a re-safe but left an open shot for his European opponent. However, Hofmann was not able to capitalise from it and missed the 2-ball. Perez used his chance and ran the table to make the score 5:3 against the US team. The next rack was played between Sierra Reams and Kristina Tkach. They both engaged in a safety battle in the early stage of the rack. Tkach turned out to win this encounter but hooked herself with the cue ball behind the 5-ball when the 4-ball was the ball on. Reams got to the table with five balls left and had a clear and open table in front of her. However, she already played a poor position for the 5-ball. She was still able to pocket it but the position for the 6-ball turned out even worse. Consequently, Reams missed the 6-ball and allowed Tkach to the table with three easy shots in front of her. The Russian young lady did not let that chance slip away and ran the table, winning the rack and the match with 6:3 for team Europe. This brought the overall 2:1 lead for the day to team Europe.

The Atlantic Challenge Cup continues tomorrow at 14:00 CET with the next session featuring scotch doubles in the boys and girls.

The complete event will be streamed for free on www.kozoom.com. Additionally, all matches will be shown LIVE on the EPBF Facebook page.