Pool & Billiard Magazine, along with our fellow members of the United States Billiard Media Association (USBMA), invite your appreciation of the industry members who signed on as “supporters” of this year’s BCA Hall of Fame Banquet. Their financial contributions help sustain the visibility and history of our sport. The following are links to the products they offer.

HALL OF FAME TICKET INFORMATION – The United States Billiard Mediia Association website has been updated with the 2015 Hall of Fame Banquet information and ticket ordering process. To order your tickets for this exciting event CLICK HERE

(Broomfield, Colo., August 18, 2015) – Two trailblazers in the pool world have earned election into the Billiard Congress of America Hall of Fame in 2015. Former world champion Oliver Ortmann of Germany and pool promoter/historian Charles Ursitti will be inducted as the 65th and 66th members of the sport’s hall of fame, the United States Billiard Media Association announced today. 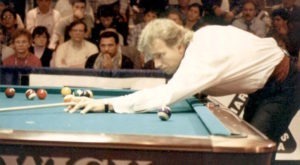 Ortmann, 48, of Hamburg, will enter the Greatest Players wing of the BCA Hall of Fame, while Ursitti, 68, who was born in New York City and now resides in Florida, will be honored for Meritorious Service. Both will be formally inducted during ceremonies on Oct. 29, 2015, at the Sheraton Norfolk Waterside in Norfolk, Va.

One of the most decorated players in Europe, Ortmann led the way for European players in the United States by scoring a shocking win over pool legend Steve Mizerak in the final of the 1989 BCA U.S. Open 14.1 Championship in Chicago. Ortmann went on to win the 1993 BCA U.S. Open, as well as three World Pool-Billiard Association world titles – the 1993 WPA World 9-Ball Championship and the WPA World 14.1 Championship in 2007 and 2010. The fiery Ortmann twice won the International Challenge of Champions (1997 and 2000), and captained Team Europe’s winning Mosconi Cup squad in 2002. He also holds 14 European Pool Championship gold medals, 13 Euro Tour titles and was three-time European Player of the Year.

“This is a great surprise to me,” Ortmann said, after being notified of his election. “It’s great news. To be honest, I had stopped thinking about the hall of fame. Many years ago I thought it was possible, but after years went by, I thought my time had passed.”

Ursitti’s career in billiard promotions began when he teamed with boxing promoter Big Fights, Inc., to produce the first-ever meeting of pool legends Willie Mosconi and “Minnesota Fats” in the “Great Pool Shootout.” The 1978 ABC-TV Wide World of Sports production drew more than 10 million television viewers, and remains the most watched pool match ever aired in the U.S. Ursitti went on to promote televised matches between Fats and Mosconi, eventually introducing modern day players like Allen Hopkins and Steve Mizerak into the productions. A seven-year run with CBS Sports Spectacular created opportunities to add more pro players, as well as female stars Jean Balukas and Loree Jon Ogonowski (Hasson). Ursitti was responsible for pool’s initial forays onto cable giant ESPN, where he promoted the “King of the Hill” series and the “Legends of Pocket Billiards” series. 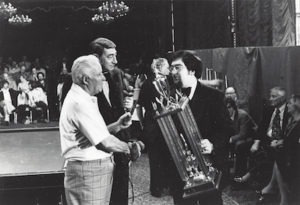 In addition to being a promoter, Ursitti researched and created a database documenting the history of competitive pool and three-cushion billiards in the U.S., chronicling the sport from 1878 to present day. The database is available online for free  CLICK HERE

Needless to say, I’m thrilled to be elected into the BCA Hall of Fame,” Ursitti said. “When I was first introduced to pocket billiards in 1976, I never dreamed of someday joining the greatest of the great. I consider myself really lucky with all of my promotions, and was honored to work with the legends of the sport, from Willie and Fats, Irving Crane and Jimmy Caras, to Mizerak, Hopkins, Mike Sigel, Jimmy Rempe and the rest. It has been a great trip, and I will cherish that forever.”

Voting for the 2015 BCA Hall of Fame was conducted by the USBMA Hall of Fame Board, which consists of USBMA members, elected At-Large members and living members of the BCA Hall of Fame. Induction into the Greatest Players category is awarded to the player named on the most ballots. To be eligible for consideration in the Greatest Players category, a player a) must be 40 years old by Jan. 1 of the year of their induction; b) must have a professional playing career of at least 10 years; and c) must have recorded significant achievements in U.S.-based events.

Greatest Player Nominees for 2015
Ortmann, in his eighth year of eligibility, was named on 60 percent of the ballots, edging out fellow pros Gerda Hofstatter (44 percent) and Kim Davenport (37 percent). Belinda Calhoun, Shannon Daulton, Mary Kenniston, Rodney Morris and Vivian Villarreal each received votes on fewer than 25 percent of the ballots.

About United States Billiard Media Association
Founded in 2007, the United States Billiard Media Association (USBMA) is a non-profit association dedicated to elevating the visibility and status of billiards in the media at large.  The USBMA consists of professional print, radio, TV, public relations and Internet media persons who cover cue sports.  One of the association’s main functions is electing of billiard media members to the Billiard Congress of America’s Hall of Fame Board for the purpose of nominating and electing players and notable figures to the Billiard Congress of America Hall of Fame.