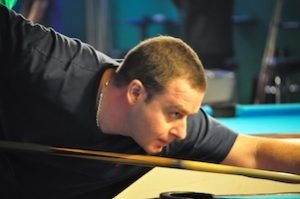 Stevie Collins Snags His First Omega Billiards Tour Title – On the weekend of February 20-21, the Omega Billiards Tour was hosted by The Billiard Den in Richardson, Texas. The staff and owners treated the players well with great service and an amazing atmosphere, and we very much appreciate each and every one of them!

We were able to extend the field to 88 players for this second stop of the 2016 season. And it was tough to predict who would come out on top with all the talent in the field.

Always a top contender, Crispian Ng, had a great tournament with tough matches over Chase LaFerney 7-5, teammate Robin Barbour 7-5, Alberto Nieto 7-4, Jim Colling 7-5 and best friend David Josephson 7-5. Stevie Collins was fighting through the bottom half of the bracket with wins over Kyle Rowland 7-0, Chris Smith hill-hill, George Merchan 7-2, Ian Perez 7-1, and Anthony Schaeffer 7-2 before finding Crispian in the hotseat. Crispian would win another close one in the hotseat match over Stevie by a score of 7-5. 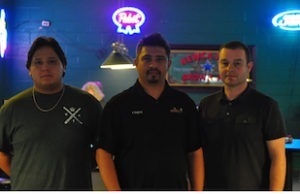 Gerardo Perez would place his highest finish with an impressive 3rd place! He lost his second match hill-hill then won TEN matches in a row to meet up the Stevie Collins in the Semi-Final match.   Stevie would win 7-3 to find a spot in the finals, but a HUGE congrats to Gerardo for his fine play all weekend. Denny Sneed placed high again in the Omega with a 4th place finish, with David Josephson and Anthony Schaeffer both placed their highest finish with 5th/6th places out of 88 players. Special shout out to George Merchan for placing 7th/8th (his highest finish to date) and to Ian Perez for his 9th place finish in his first Omega Tour event.

The finals were a tough, tough battle between Stevie Collins and Crispian Ng. Crispian is a BCAPL Nationals 9-Ball Champion and Stevie Collins is also a top player (and this was his home pool room). Both players wanted the win badly and it showed. First set went a thrilling hill-hill with Stevie never giving up, forcing a second set. Then the second set went hill-hill again! Stevie continued his great play and ran out 7 balls to win the game, the match, the finals, and the tournament! His first Omega Billiards Tour win! Congratulations also to Crispian for fighting hard all weekend for his second place finish. He’s always hard on himself, but he played so good all weekend and deserves lots of kudos as well.

Congrats to ALL the players and fans for a great event!

A HUGE thank you goes out to our sponsors Omega Billiards Supply, Predator Cues, BCAPL/CSI, and OB Cues. We would also like to give a big thanks to our additional sponsors, Irving Ink and Thread, AZBilliards.com, Pool School, and BilliardsPress.com.

This year OB Cues is our Ranking sponsor and will be donating three OB Cues to the top ranked 3 players at the end of the year! BCAPL/CSI has joined again and will be giving away 5 BCAPL free entry fees the 2017 BCAPL Nationals.

Tournament Director Melinda Bailey would like to thank The Billiards Den owners and staff for their awesome hospitality all weekend! She would also like to thank her fabulous team: Heather Farr and Dana Speed.

The next stop will be held March 19-20 at Clicks in Arlington, Texas.  $1,500 added and limited to the first 80 PAID players (already full). We will have ten stops total again in 2016. Pool is alive and thriving in Texas!

And check out video compilation from this event:  https://www.youtube.com/watch?v=ET8xjxyD1i0&feature=youtu.be 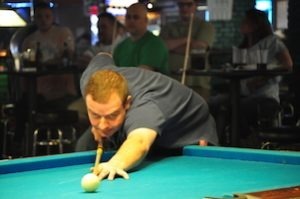