Rick Stanley came into the 7th stop on the Omega Billiard Tour as its top player, ahead of Mike Voelkering by 70 points. At the end of that July 15-16, $1,700-added event that drew 64 entrants to Open Table in Azle, TX, Stanley had held on to that top spot, with Voelkering, finishing fourth, maintaining his position in second place. Stanley went undefeated through the field to capture the event title. 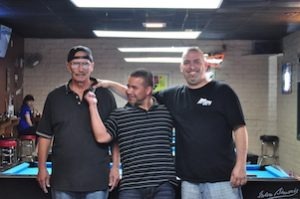 After four wins each, Stanley and Voelkering went head to head in one of the winners’ side semifinals of this most recent event, as Jesse Hernandez (#17 on the tour’s rankings list) and Robin Barbour (#16) squared off in the other one. Stanley (racing to 9) sent Voelkering (racing to 7) to the loss side 9-4. Hernandez sent Barbour over 7-3 to join Stanley in the hot seat match. Stanley put an exclamation point onto his victory in the hot seat match by shutting Hernandez out.

Over on the loss side, Voelkering opened his loss-side trek against Fahad Alrawi, who’d defeated Chris Rickman, double hill, and Justin Whitehead 5-2 to reach him. Barbour drew Douglas Pitts, who’d been defeated in the opening round of play and was on a nine-match, loss-side winning streak, that would include, most recently, victories over Jay Murillo 7-1 and Luis Lopez 7-4.

Voelkering and Pitts advanced to the quarterfinals; Voelkering 7-1 over Alrawi, and Pitts, chalking up loss-side win #8, 7-4 over Barbour. Voelkering’s opportunity to gain ranking ground on Stanley was spoiled by Pitts, who won his last match of the weekend with a 7-5 win over Voelkering. Hernandez, though, spoiled any hopes Pitts may have been entertaining about an event victory by defeating him 7-2 in the semifinals.

After being shut out in the hot seat match, Hernandez put up a fight in those finals. He managed to chalk up four, but Stanley chalked up his requisite nine, claimed the event title and maintained his top-ranking on the Omega Billiard Tour.

Tour director Melinda Bailey thanked the ownership and staff at Open Table, as well as sponsors Michael Hoang of OMEGA Billiards Supply, FargoRate.com and OB Cues. The next stop on the Omega Billiards Tour, scheduled for Aug. 5-6, will be hosted by Wizards in Richardson, TX.