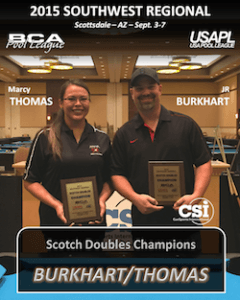 The event began on Thursday evening with 32 scotch doubles teams (64 players) competing for the title. After winning their first five matches, the team of JR Burkhart and Marcy Thomas found themselves in the hot seat awaiting a final opponent. That eventual opponent would be a team they had defeated in the 4th round – Jeremy Gibbs and Bernie Store. After that defeat, Gibbs and Store won three straight matches to earn a rematch against Burkhart and Thomas. However, the final match was a repeat of the first with Burkhart and Thomas claiming the title of 2015 Southwest Regional Scotch Doubles Champions. 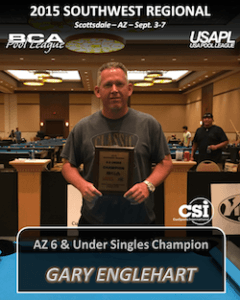 Utilizing the current Arizona rating system, 77 players rated as 6 or lower competed in the AZ 6 & Under Singles division which began Friday at noon. By Saturday night, two players remained undefeated to face each other in the hot seat match – Randell Moore and Becky Onnembo. Moore sailed to a 5-1 win and earned a seat in the finals. Onnembo then faced Gary Englehart who lost his 5th round match but cruised through the one-loss side with four straight wins to reach the semi-final. Englehart proved to be too much for Onnembo as he won 5-2 and earned a trip to the finals against the undefeated Moore. Englehart would have to defeat Moore twice in the true double elimination format. He looked sharp early and won the first set 5-2 to force a final and deciding set. Englehart’s momentum continued in the 2nd set as he won by a decisive 5-0 score and earned the title of 2015 Southwest Regional AZ 6 & Under Champion. 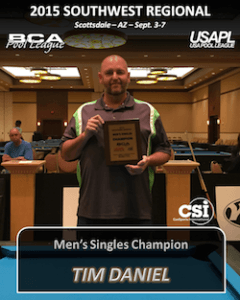 97 men competed in the Men’s Singles division which began Friday evening. By Saturday night, Tim Daniel had earned his way to the hot seat with a closely contested victory over Brian Begay. Begay moved to the one-loss side to await another opponent. That opponent would be a player that had won six straight one-loss side matches – Nick De Leon. The momentum was with De Leon as Begay became his 7th consecutive victim by a score of 6-1. This set up what was sure to be an exciting final match between two local favorites – Daniel and De Leon. However, the match did not live up to the billing as Daniel exhibited terrific 8-ball skill and won easily by a score of 6-2 to become the 2015 Southwest Regional Men’s Champion. 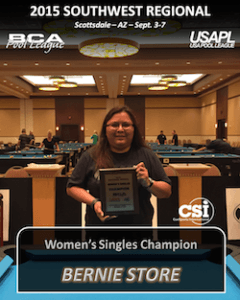 The Women’s Singles division began on Saturday morning and consisted of 36 ladies. By Saturday night, local favorite Bernie Store was the only undefeated player remaining as she awaited an opponent in the finals. Meanwhile, Sara Miller, who had lost her 3rd match to Keitha Nelson, won five consecutive matches on the one-loss side to earn the right to face Store in the finals. Miller would have to defeat Store twice. Unfortunately for Miller, Store would not falter as she cruised to a 6-2 victory over Miller and earned the title of 2015 Southwest Regional Women’s Champion. 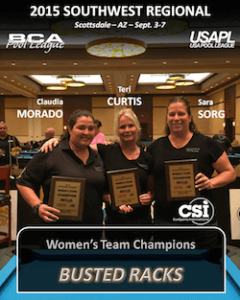 Ten teams consisting of 32 ladies competed in the Women’s Teams division which began on Sunday morning. Twelve hours later, Busted Racks was the only undefeated team and awaited a final opponent. That final opponent was a team they had defeated in the 2nd round – Your Mom. Busted Racks would not be denied as they capped their undefeated run with a 6-2 victory in the finals to become the 2015 Southwest Regional Women’s Team Champions. 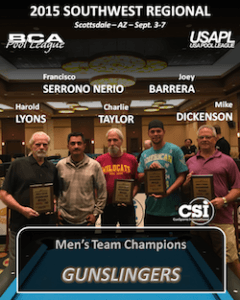 32 teams consisting of 143 men competed in the Men’s Teams division which began on Sunday morning. By Monday afternoon, Gunslingers, a severe underdog among the field, sat undefeated in the hot seat. Meanwhile, after losing their 2nd match to Highway 50 Nitemare, team No Mercy, who had been the perceived favorite among the field, fought through seven highly contested one-loss side matches to earn a trip to the finals. In the minds of many, this represented a David vs. Goliath matchup with No Mercy being heavily favored. However, reality diverted from perception once again with Gunslingers winning the first set and earning the title of 2015 Southwest Regional Men’s Team Champions.

Law of the Land Benefit

On Saturday night, professional player and Arizona resident Scott Frost conducted a charity tournament for 34 year-old local player Lawrence Ybarra, who has been diagnosed with stage 4 colon cancer. 100 people participated in the event and 100% of the proceeds went to help Ybarra with his battle. Frost stated that over $9,000 was raised to help Ybarra and his 7 year-old daughter. An online fundraising campaign has also been created by Ybarra’s family. To donate, CLICK HERE

To view the complete brackets, results, payouts, winner photos and more, visit the official webpage at http://www.playcsipool.com/2015-southwest-regional.html. Also, join the CSI email list to be notified about the 2016 Southwest Regional Championships and other CSI-produced events.

All live streamed matches were recorded and will be released on the CSI YouTube channel soon. To be notified when the matches are released, subscribe to the channel by visiting http://www.youtube.com/user/csipool?sub_confirmation=1.

CSI would like to thank all of the players that participated and made this event a huge success. Stay tuned for upcoming information about the 2016 Southwest Regional Championships.