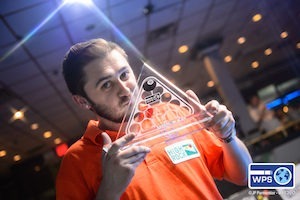 American Skyler Woodward steps onto the big stage with the biggest win of his career, beating Darren Appleton to win the RYO Rack Classic at the World Pool Series.

(New York City)–When pool fans look back years from now at the career of Skyler Woodward, it will surely be noted that it was precisely in mid-July, 2017 in New York City that the friendly and talented Kentucky native finally stepped onto the big stage in the professional ranks.

Playing a beautiful game of fast and care free pool, Woodward,24, captured the biggest title of his young career on Saturday night at Steinway Billiards in Queens, winning the third leg of the World Pool Series, the RYO Rack Classic, with a relatively easy two sets to nil finals win over English great Darren Appleton.

It was a dizzying finish to an amazing four days of brutally tough 8-ball for the soft spoken Woodward. He never tasted defeat throughout the event. On Saturday he first had to endure an over 5 hour marathon semi-final match with 18 year old Albanian Klenti Kaci, staring down almost certain defeat on several occasions, only to make an amazing comeback in the third set to vault into the finals. Then, with almost no time to catch his breath, Woodward practically free-wheeled it in the final and showed the legend Appleton who was boss for this day.

With the win, Woodward has now placed himself among the top young stars of the American pool scene. Already one of America’s top bar table players, the Peducah native has a bag full of tools that foretell big things to come. Personable, loaded with talent, drive, and an infectious and positive attitude, Woodward has the pool world at his feet. He will now surely once again be on the Team USA Mosconi Cup squad in December. And he looks more than ready to be a regular winner and contender both nationally and internationally in all the biggest events.

Woodward, though, nearly didn’t get past the semi-finals at the RYO Rack Classic. Kaci came to New York as the favorite, having shocked the pool word by winning the second leg of the World Pool Series back in April. The superbly talented young Albanian, who only recently graduated from high school, had spent the three months since touring America and even the Dominican Republic, immersed in pool for over ten hours a day in money games, tournaments and practice. Kaci was clearly in excellent form in New York.

Kaci had barely been challenged in the first three days of the event but would get a stiff test from Woodward in the semi-finals. The two dueled for nearly 90 minutes in the first set, but Kaci grabbed the point with a fine finish. Woodward bounced back nicely in the second race-to-six set, and brushed off several errors to take the match to a one set decider.

With his methodical and amazing precision play, Kaci took advantage of several errors by the American in the third set and shot out to a commanding 4-1 lead. Woodward, though, stayed in the moment and didn’t get flustered or fazed. Showing tremendous bottle, the American won five straight racks to book his spot in the championship match.

There he would meet a resurgent Appleton, who had been playing some of his best pool in months this week in New York, despite juggling promoting duties at this event, and also having to deal with him mother’s illness back home in Pontefract. Earlier in day Appleton met Polish veteran Radislaw Babica in the semi-finals. The Englishman won the first set, while the Pole took the second. Appleton picked himself up and put together an excellent run in the third set to make his first World Pool Series final.

Appleton came in to the final a slight favorite, if only because he’d been on the big stage countless times in the past. He also had over an hour to catch his breath, while Woodward had only 30 minutes rest after his arduous 5 and a half hour semi-final against Kaci.

Woodward, though, came out loose and self-assured, as if he didn’t have a care in the world. The pair went back and forth early in the first set, but then Woodward stamped his class on the match. With strong confident potting and well thought out patterns, the American took the first set 6-3.

Woodward kept up the relaxed attitude and great shooting in the second set and it was only a few games in that it was clear he had Appleton’s number this day. Appleton actually had a chance to tie the set at 3-3, but as he got down to shoot the 8-ball in the pocket, he touched one of Woodward’s solids with his arm, resulting in a foul and run out for the American. The gaff put the wind in Woodward’s sails as he won the next two racks for the crown.

Afterward Woodward was mobbed by fans at Steinway who all wanted a photo and an autograph with this new American pool star. As he greeted all the well-wishers, Woodward couldn’t quite wrap his head around what he had just accomplished. Not only had he won the biggest tournament of his career, but he had done it in the Big Apple against a stacked field. He was sure, however, that it was the start of even bigger things to come.

“I played good and steady the whole tournament,” Woodward said. “When I finished the match with Klenti I just went and sat down away from the pool table. I didn’t even hit a ball, I didn’t even look at a pool table until we started the final match. I had a clear head, I was ready to play the finals and I was fresh again. I know I played a little quick but I felt real comfortable.

“You have to capitalize on every mistake that your opponent makes and stay positive. Even when I was down on myself, even when I showed a few emotions, I was still positive

“It feels crazy. I feel amazing. I still haven’t come down off it all the way. It’s the biggest win I have ever had. I think it’s going to be a big jump for me. I think I’m just going to get better from here.”