(by Melinda Bailey, Tournament Director, Omega Billiards Tour) On the weekend of September 12-13, the Omega Billiards Tour was hosted by Clicks Billiards in Arlington, Texas. The staff and owners treated the players well with great food and an amazing atmosphere, and they took care of all us all weekend long covering very long hours and we very much appreciate each and every one of them.

The field of 80 players was full again of top players and by Sunday afternoon everyone kept their eyes on 2014 Omega Tour Champion, Nick Conner, and newly-crowned Texas Open Champion, Sky Woodward. They seemed to be the players to beat in this $1,500-added tournament.

David Bell placed an impressive 3rd place (his highest finish yet) and Chris (Woody) Smith placed 4th – his highest finish yet as well. Both players played great all weekend and earnt those top spots for sure. Always tough to beat both Cory Anderson and Barry Emerson placed 5th/6th and traveling all the way from Houston (both) Mike Liang and Eric Hsu placed 7th/8th in the tough field of 80 players. 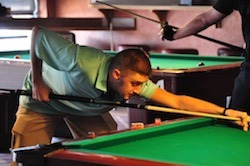 Young gun Sky Woodward made his way to the hotseat with wins over Joseph Pruiett 9-1, Ed Redman 9-1, Mike Voelkering 9-4, Mark Szabo hill hill (9-5) Chris Smith 9-4 and Cory Anderson 9-0. Nick Conner made his way to meet Sky in the hotseat with wins over Jay Murillo 8-4, Mike Liang 8-3, Frank Cherry 8-6, David Bell 8-3, and Berry Emerson 8-2. The hoteast was a GREAT match and it would go hill-hill! Sky would end up on top and sent Nick to the one-loss side where he defeated David Bell 8-4 for a rematch with Sky, this time in the finals. Again, it was a fantastic match of great shots and skill and again it went hill-hill! Would there be a second set in the true double elimination finals? Nope – Sky would win the match hill-hill and seal his first place at this Omega Billiards Tour Stop! Congrat’s to Sky for his great play in Texas the last week, and congrat’s to Nick for an impressive 2nd place against strong competitors (and the only one to get hill hill (twice) with Sky. 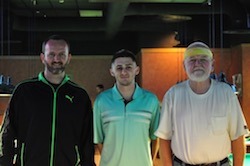 Congrats to ALL the players and fans for a great event!

A HUGE thank you goes out to our sponsors Omega Billiards Supply, Predator Cues, Poison Break Cues, BCAPL/CSI, and Lucasi and Players Cues. We would also like to give a big thanks to our additional sponsors, Hulsey Custom Cues, OB Cues, Irving Ink and Thread, Pro Billiard Service, AZBilliards.com, Billiards Digest, and BilliardsPress.com.

After eight stops this year (one more to go for the final point standings), Greg Sandifer has snuck to first place with 715 points, Daniel Herring is close by in second place with 710 points and Nick Conner has moved into the top 3 with 590 points. Close behind is Cory Anderson with 555 points (4th) and Crispian Ng with 480 points (5th). It’s a tight points race for the end of season Predator prizes! And only ONE more event to go for the rankings!

Tournament Director Melinda Bailey would like to thank Clicks owners and staff for their awesome hospitality all weekend!

The next stop of the Omega Billiards Tour will be October 10-11 at Speeds Billiards in Arlington, Texas. $1,500 added and limited to 80 players.   Still 1 more stops left before the $4,500-added Season Finale! Pool is alive and thriving in Texas!