(Doha, Qatar)–After an unpredictable day of world class pool, pool’s 2016 WPA World 9-ball Championship has come down to the last 16 competitors. From here the pressure and drama is guaranteed to be ramped up, as the remaining players can suddenly see the golden prize, pool’s ultimate and most prestigious crown. The round of 16 and the quarterfinals will take place on Wednesday. The semi-finals and final will be held on Thursday.

And what a race to the mountain top of pool it will be. The final 16 still standing comprise an amazing mix of players from nearly every pool playing region. Some of those still present represent the current and old guard, while a slew of them embody the strong youth movement in the sport of pool. The only thing we know for sure is that we will crown a brand new champion come Thursday evening. 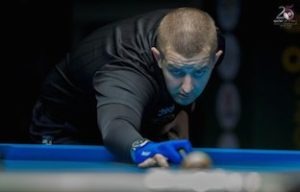 Great Britain’s Jayson Shaw today made an excellent case for some seriously good odds being placed on the affable Scotsman. Shaw came into this year’s championship playing the best pool of his career. In Doha, the 26 year old had to come from the loser’s side in the group stages, and in his first match in today’s round of 64, he was paired up against none other than defending champion Ko Pin Yi.

Shaw never flinched and looked as cool as the Al Arabi Sports Club air conditioning out on the TV table. Breaking well and playing excellent safeties, the Brit surprisingly waltzed to a comfortable 11-5 win over the fancied Taiwanese.

In the round of 32 Shaw then had to face another monster in the Philippines’ Dennis Orcollo, who had just come from behind to topple Germany’s Thorsten Hohmann, 11 – 8. Again, Shaw was unflappable, coming back from an early deficit to walk away with the match, 11-5.

The Scotsman certainly seems to have that winner’s air about him. Relaxed, focused and clearly having the time of his life, Shaw has all the tools in his bag to advance even further.

“I feel really calm out there,” Shaw said after disposing of Orcollo.  “I’m just taking it ball by ball, not thinking ahead, grinding away, stay down on the shot, put the cue straight through the shot, take my time, don’t let it affect me if I make a mistake or two.  I’m happy with my performance. Breaking good, safeties are good.  When the tournament started my goal was to get to the last 16, and I’ll just carry on from there. Now I’m there. I’m happy, really pleased.  Hopefully I can keep the momentum tomorrow and roll on again.”

If you’ve watched enough pool at this level, it quickly becomes clear that being able to let the inevitable stress roll off your back and play without a care in the world is a big  key to success.  Which means just because Shaw’s next opponent in the round of 16 is hardly a big name, that doesn’t tell him things will get any easier.

Artem KoshovojUkraine’s Artem Koshovoj hasn’t even played much competitive pool in the last two years, as he’s been busy helping his family run their wall paper factory. But this break from the game seems to have served Koshovoj well. The Euro tour veteran only got an entry into this year’s World 9-ball Championship when he placed 5th in the European Championships this year.  He only spent two weeks practicing before coming to Doha.

Like Shaw, Koshovoj has been playing relaxed and carefree and today that approach saw him take down two heavyweights. He first defeated the Philippines Johann Chua, 11-8. He then cut down Taiwanese veteran Chang Jun Lin 11-7.

“Sometimes it’s better when you have a long rest and then you come back and play,” the Ukranian said afterward. “You are more fresh. I’m just playing my game and everything is going.  I don’t make many mistakes. I have no pressure. When you play all the tournaments, you have to show some results. But I come here just for playing. I hope tomorrow will be the same.”

Estonia’s Dennis Grabe also performed marvelously today. After crushing Poland’s  Mieszko Fortunski, 11-3, Grabe headed to the round of 32 to square off with 2005 World 9-ball Champion, Wu Jiaqing. The 26 year old Grabe was hardly in awe of the great Wu. He led throughout and confidently closed the door on a Wu fight back, winning impressively, 11-7. 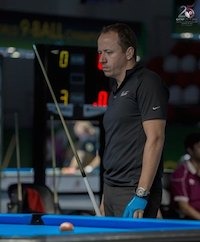 One of the big favorites over the next two days has to be the USA’s Shane Van Boening. Van Boening, who was runner-up here last year, seems bent on taking it all the way this year. Except for one loss in the group stage, the American has played flawlessly, always leaving himself shots on the break and never letting his opponents into the match. Today he took down  Filipino veteran Warren Kiamco and then Taiwan’s Wu Kun Lin.

Van Boeing will be a heavy favorite in his round of 16 match against Kuwait’s Omar Al Shaheen, who continued his surprising run today, first beating Spain’s  Francisco Pizzarro Diaz, 11-9, then the UAE’s Salah Al Remawi, 11-4.

Tuesday was a downright awful day for the always strong Philippine contingent, but Carlo Biado is now making a case for perhaps being the top player from one of the world’s best pool playing countries. After barely making it into the knockout rounds, Biado today played like a man on fire, crushing fellow Filipino Ramil Gallego, 11-5, then Korea’s Jeong Young Hwa, 11-4.

Shane Van BoeningBiado will square off with Ko Ping Chung, the younger brother of last year’s champion, Ko Pin Yi. Don’t be surprised if the boyish Ko goes all the way. The Taiwanese youngster is wildly talented, and some say even more so than his champion brother. Last year Ko made it all the way to the semi-finals where he lost to his older brother. With his big brother now out of the event, this could be the younger Ko’s turn to shine on the big stage. Certainly his matchup with Biado promises to be highly entertaining.

It’ll be an all-Austrian affair when Mario He takes on 2014 runner up Albin Ouschan. Ouschan played his typical steady game today while He went to the wire against Hall of Famer Ralf Souquet in the round of 32.

Another young European making a name for himself this year is Alexander Kazakis who had two solid wins today including an 11-6 win over China’s Liu Haitao. He’ll face another tough Chinese Chu Bing Jie who marched untouchable through today’s two rounds.

Muhammad Bewi of Indonesia escaped into the round of 16, first with a well played 11-7 win over Britain’s Karl Boyes, then with a gutsy close against Singapore’s Toh Lian Han, 11-10. Bewi will face Canadian-Filipino veteran Alex Pagulayan, who in the last 18 months has found renewed passion for pool after several years away. Pagulayan, a true master of pool and winner of this event in 2004, played solid and steady in his two wins today.

Pagulayan’s approach to the game these days sums up the prevailing attitude that seems to produce winning runs in the biggest and most pressure packed tournament of them all; don’t get carried away. Just relax and try to have fun.

“I just play the game,” Pagulayan said after his comeback win against China’s Zhou Long in the round of 32. “ I don’t think about anything. It’s just another game. I just think one ball at a time.  I don’t know if my experience is an advantage. The young guys these days they play so good. You have to play good and get lucky. I won’t be here if I don’t think I can win it. But at the same time, I don’t want to pressure myself. It’s just another game. It’s not the end of the world if I lose. It’s not the end of the world if I win. Life goes on. “

The 2016 World 9-ball Championship is being hosted by The Qatar Billiard and Snooker Federation(QBSF), and is sanctioned by the The World Pool Billiard Association, the governing body of the sport of pool.

Up to date brackets and live scoring can found at this link:
http://www.online-brackets.com/view/user/wpc9ball/1010

The WPA will be on hand in Doha throughout this year’s World 9-ball Championship providing up to the minute information, live scoring, photographs and in depth articles with insights and analysis from WPA Press Officer Ted Lerner.