Sharik Sayed from Missouri planned a trip to see his friends the same weekend as the Omega Tour to be able to hang out with them and also play some pool. And play pool he did! Sharik started his tourney streak with wins over Stevie Collins 8-0, Andrew Talton 8-3, Ruben Juarez 8-2, Jeff Georges hill-hill, CJ Wiley 8-6, and Daniel McAdams 8-2 before finding himself fighting for the hot seat against Rick Stanley. Rick had wins over Phillipe Tieu 8-4, Robin Barbour 8-2, Anthony Schaeffer hill-hill, Mike Voelkering 8-5 and Curtis Cardwell 8-3 before meeting up with Sharik.

In the hostseat match it was anyone’s game but Sharik came out on top 8-4 over Rick.

After CJ Wiley lost to Sharik Sunday morning, he then defeated Douglas Pitts 9-5, Joel Betancourth 9-0, Curtis Cardwell 9-3, Mike Voelkering 9-4 and then Rick Stanley 9-4 to earn his spot in the finals with Sharik! 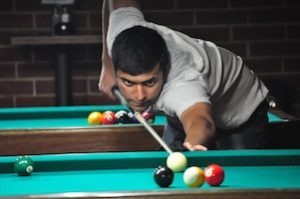 The finals started off close but then Sharik pulled ahead to win the final match with a score of 8-5 to capture his first Omega Billiards Tour stop! Big congrats to Sharik going undefeated! Congrats to CJ Wiley for his great 2nd place finish, to Rick Stanley for his highest finish yet with 3rd place, and to Mike Voelkering for a great finish in 4th place!

Congrats to ALL the players and fans and sponsors for another great event!

A HUGE thank you goes out to our sponsors Omega Billiards Supply, OB Cues, and BCAPL/CSI. We would also like to give a big thanks to our additional sponsors, Irving Ink and Thread, AZBilliards.com, Pool School, and BilliardsPress.com.

This year OB Cues is our Ranking sponsor and will be donating three OB Cues to the top ranked 3 players at the end of the year! BCAPL/CSI has joined again and will be giving away 5 BCAPL free entry fees the 2017 BCAPL Nationals. After 7 stops, Tony Sulsar leads the Rankings with 640 points, Crispian Ng is second with 535 points and CJ Wiley is close in third place with 510 points. Only two more stops to go for raking points before the Finale!

Tournament Director Melinda Bailey would like to thank Wizards owners and staff for their awesome hospitality all weekend! She would also like to thank her fabulous team: Dana Speed, Jeff Georges, and Ginger Abadilla.

The next stop will be held September 17-18 at Speeds in Arlington, Texas.  $1,500 added and already full with 85 players. We have ten stops total in 2016. Pool is alive and thriving in Texas!

And check out video compilation from this event: https://youtu.be/R9OpnbSZPSc