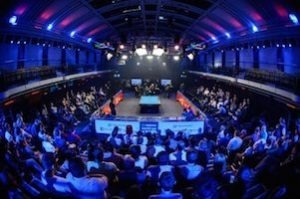 WITH JUST under one month to go before the 2017 World Cup of Pool gets underway at the York Hall, East London, the schedule of matches can be announced. Taking place from June 13-18, the World Cup of Pool features some of the best players in the world as 32 two-man teams from around the world battle it out for the $60,000 top prize.

2017 WORLD CUP OF POOL is sponsored by Rasson Billiards who supplies the Official Table; the cloth is supplied by Iwan Simonis and the Official Balls are Super Aramith by Saluc. Predator is the Official Cue and Chalk of the event.

There are six matches per day, with three in the afternoon session and three in the evening and all first and second round matches are a race to eight racks.

Commented Matchroom Sport Chairman Barry Hearn, “Looking down the list of teams and players, this could be the best World Cup ever. There are some great looking first round matches – England A v India is a stand-out – and I’m sure there will be plenty of shocks in the opening games.”

Commencing on Tuesday June 13 and culminating with the final on the evening of Sunday 18, the event will be played to a single elimination format over six days with two sessions a day. There are 31 matches in total.

Tickets are on sale now at www.matchroompool.com priced at just £10.00 per evening session (Tuesday to Sunday) and £8.00 per weekend afternoon session. Tuesday to Friday afternoons are free. A season ticket covering all sessions is priced at £60.00.

The World Cup of Pool will carry a $250,000 prize fund including $60,000 for the champions. The event will be produced by Matchroom Sport Television and televised live on Sky Sports as well as other stations around the world. It is then syndicated internationally as 31 x 1 hour programmes.

Notes: MATCHROOM SPORT is one of the world’s leading producers of televised sport and is responsible for over 1,000 hours of original programming across a range of sports. Based in the UK and chaired by charismatic founder Barry Hearn, they operate three pool events; the Mosconi Cup, the World Cup of Pool and the World Pool Masters. In addition, the company produce a multitude of events in darts, snooker, tenpin, golf, fishing, ping pong, gymnastics, netball, basketball and boxing.