Three years after he won his first title, Sargon Isaac has captured the 2015 United States National Snooker Championship with victory in the final over Ahmed Aly Elsayed at the Prince Snooker Club in Brooklyn, New York, over the Memorial Day Weekend. 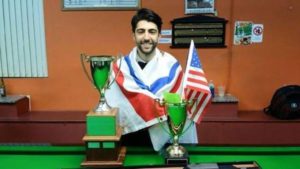 After winning that title back in 2012 at the Embassy Billiards Club in San Gabriel, California, he was then runner-up a year later, and twelve months ago he suffered a crushing 4-0 loss to Ajeya Prabhakar in the semifinals, so the 29-year-old will be incredibly happy this year to have his hands back on that Championship trophy.