Scruggs, maker of the popular Black Boar Cues, began his career as a machinist. He went to work for Dan Janes at Joss Cues in 1972, and worked there until 1978. He then went out on his own, partnering with Bob Fry. 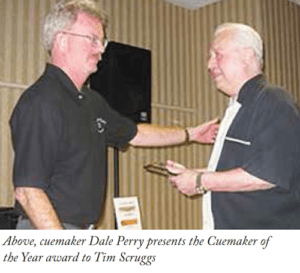 (In the photo on the left, cuemaker Daly Perry and Tim Scruggs on the right)

In 2009 Tim Scruggs was awarded the American Cuemakers Association’s Cuemaker of the Year award, giving recognition to an ACA cuemaker
who “has provided a quality product and who has conducted his/her business in an honorable and ethical manner.”

Based in Baltimore, Maryland, Scruggs was known for mixing modern and classic themes to best present his elegant designs and materials.