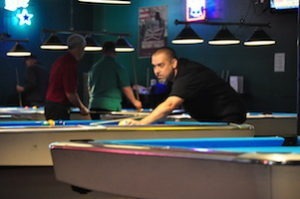 Rick Stanley Captures His First Omega Tour Stop. On the weekend of February 11-12, he completed this somewhat modest climb up the ‘finish’ ladder with an undefeated win on the tour at the February stop. The $1,700-added event drew 87 entrants to Billiard Den in Richardson, TX.

With victories over Steven Thorne, Bob Youngblood, Denny Steed, Albert Nieto, and Jay Murillo, allowing them each an average of just over three racks per match, Stanley moved into a winners’ side semifinal against his friend, Doug Winnett. Tony Sulsar, in the meantime, who’d allowed an average of just over 2.4 racks per match against Crispian Ng, Brandon Thrasher, Terrance Cockman, Douglas Pitts, and Hector Guerrero, faced Shan Iyer in the other winners’ side semifinal.

Stanley and Sulsar (also good friends) moved into the hot seat match; Stanley 9-4 over Winnett and Sulsar 8-2 over Iyer. Stanley claimed the hot seat 9-4 over Sulsar and waited on what turned out to be the return of Amos Bush, who launched a nine-match, loss-side winning streak to challenge him in the finals.

Bush, who’d been sent to the loss side by Julie Stephenson, double hill, in his second round of play, got by Mike Voelkering, Juan Batista, Rob Lovelace, Douglas Pitts, and Jay Murillo to earn himself a re-match against Stephenson in a battle for 7th place. He downed her 7-1 to draw Iyer. Winnett, in the meantime, picked up Robert Kempf, who’d defeated Barry Emerson 6-6 (Emerson racing to 8) and, in a straight-up race to 6, Hector Guerrero 6-4.

In a straight-up race to 7, Bush picked up loss-side win #7, double hill over Iyer. He was joined in the quarterfinals by Winnett, who’d eliminated Kempf 7-4. Bush then defeated Winnett 7-3.

Bush completed his loss-side run with a 7-5 semifinal victory over Sulsar, earning himself a shot against Stanley in the finals. Stanley, though, was not in the mood to allow Bush a well-earned event victory. He defeated Bush 9-3 (Bush racing to 7) to claim the event title.

Congratulations to all the players!

Big shout-out to Julie Stephenson who captured the highest finish of any female on the Omega Tour’s five-year history with her 7th/8th place finish!

Tour director Melinda Bailey thanked the ownership and staff at the Billiard Den for their hospitality, as well as sponsors Omega Billiards, FargoRate.com and OB Cues. The next stop on the Omega Billiard Tour, scheduled for March 25-26, will be another $1,700-added event, hosted by Pockets Billiards in Euless, TX.