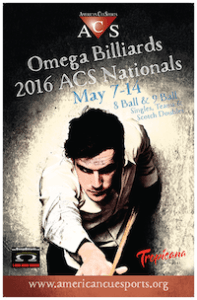 American Cuesports Alliance: “The tantalizing allure of many events in which to play throughout a week of pool camaraderie and great dates convenient to most independent leagues at the end of their seasonal league play fueled a 10% jump in entries at the 12th edition of the Omega Billiards ACS National Championships, produced by the American CueSports Alliance (ACS), May 7-14, 2016.

“The ACS wishes to thank its main sponsor, Omega Billiards, and its very popular host venue, the Tropicana Las Vegas, and we look forward to hosting the Omega Billiards 2017 ACS Nationals at the Tropicana Las Vegas, in May 13-20! Any pool league is qualified to sanction with ACS. For more information on sanctioning or dual-sanctioning your league with the ACS ($10/player annual sanction fee), contact the ACS at info@americancuesports.org or 920-662-1705.

The ACS is a non-profit, national organization dedicated to heightening the interest and awareness of cue sports through the support and sanctioning of organized competition throughout the United States and North America.

Further news on ACS activity is available at www.americancuesports.org