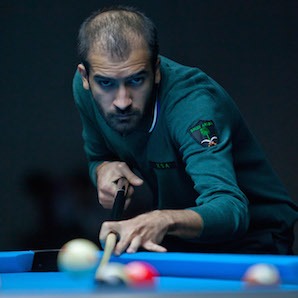 IT’S KNOCKOUTS FOR THE NEW GUYS
Saudi Arabia’s Abdulrahman Al Amar leads a crop of surprising players who have booked their spots in the Final 64 of the World 9-ball Championship.

Today’s three sessions were given over to all winners’ side matches in the 16 groups with 32 spots available in the coveted single elimination round of 64, which begins on Wednesday.  Losers in Monday’s matches knew they’d be given another chance to advance on Tuesday so the brutal pressure of judgement day, where every match is do-or-die, wasn’t quite as bad. Still, five former World 9-ball champions and the current defending champion all had chances to advance today. All lost and will have to come back again for one final go on Tuesday.

It was an excellent day for the Philippines, which sent five players through, as well as China and Taiwan, which each saw four of their players advance to the knockout rounds.

With the absence this year of legends Efren Reyes and Francisco Bustamante, Filipino overseas workers in Qatar haven’t turned out in quite the numbers that they have in the past to watch their fellow countrymen do battle. Still, Filipino fans are starting to warm up to the superb talents that are clearly ready to take their own place on the big stage.

Dennis Orcollo has won tournaments around the globe, and is a threat to win any event he enters. Orcollo faced a stingy opponent in Hosain Sayeem from Bangladesh, but overcame several errors to cruise, 9-6. Carlo Biado, another highly touted Filipino, has been knocking on the door of big time success for two years now. Biado looked impressive in his 9 – 5 win over Italy’s Daniele Corrieri.

Two young guns from the Philippines who aren’t that well known to local Pinoys, but very well could be in the coming days, are Jeffrey Ingacio and Raymond Faraon. Both youngsters possess scary-good games and they showed it today as they advanced with solid wins.

Easily the most popular Filipino at the moment in Qatar is veteran Antonio Gabica. The superbly talented Gabica moved to Qatar several years ago and works as a coach for the Qatar national pool team.  Two years ago Gabica electrified both local Filipinos and Qataris when he made an incredible march to the finals, only to fall short to eventual championThorsten Hohmann. Gabica won his second straight match today to advance to the Final 64.

It’s been ten years since China’s Wu Jia Qing, then  known as Wu Chia Ching and playing for Taiwan, stunned the pool world by winning the World 9-ball Championship at just 16 years old. Wu grabbed a spot in the final 64 today, easily defeating one of the Philippines best unknown players, Oliver Medenilla, 9-2.

Joining Wu in the Final 64 is one of China’s most promising young talents, Wang Can, who defeated the Netherlands’ Marc Bijsterbosch, 9 -4. Dang Jin Hu and Lee Hei Wen, two other members of the China’s government funded national pool team, advanced to the knockout stage with victories.

As good as the 26 year old Ko is, his younger brother, 19 year old Ko Ping Chung, has talent that is simply off the charts. The rail thin and baby faced Ping Chung seems to go hardly noticed in the arena and his unfortunate opponents tend to pay the price for thinking he can barely hold a cue. The younger Ko booked his spot in the Final 64 today with an easy win over Peru’s Christopher Teves, 9 -2.

Also making it to the Final 64 for Taiwan was last year’s semi-finalist and former world number one, Chang Yu Lung, and Wu Kun Lin.

Part of the fun of this year’s World 9-ball Championship has been witnessing the rise of some great new talents from unlikely places who are ready to make a name for themselves. Greece’s Alexander Kazakis jumped out to a 4-0 lead over defending champion Niels Feijen only to see the Dutch great claw back into the match and take it to down to a one rack decider.  But the 24 year old Greek held his nerve to stave off Feijen’s fight back, and book his spot in the knockout rounds.

“I’m feeling great,” a clearly pumped Kazakis said after his win. “In the game of pool anything can happen. Even the underdog can win, especially in alternate break, just a race to 9.  So it’s nice. I’m lucky for now. This win really helps my confidence. We’ll see what happens from here.”

Venezuela’s Jalal Yousef has been around the pro ranks for nearly a decade but his match today against two time World 9-ball champion Thorsten Hohmann was probably the biggest of his career. Yousef prepared himself for war and after jumping out to a sizeable lead on the German, that’s exactly what he got as the match went straight to the cliff and a one rack decider. Yousef held on for the career best victory.

“He wasn’t too lucky,” Yousef said afterwards. “ I caught the chance and I played my game and thanks to God I won. We are talking about Thorsten Hohmann. When you beat this guy in a tough match like that and you are playing your A game, that is the kind of match that gives you a lot confidence moving forward.” 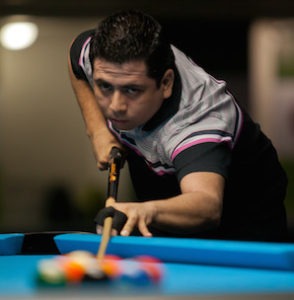 Mexico will see its first player in over a decade in the Final 64 as Rueben Bautista held off Poland’s Radislaw Babica in a 9-8 thriller to advance. This is the 26 year old Mexico City native’s first World 9-ball Championship but the youngster is not short of experience. He’s been traveling the world for the last two years, including spending two months in the Philippines, honing his game. 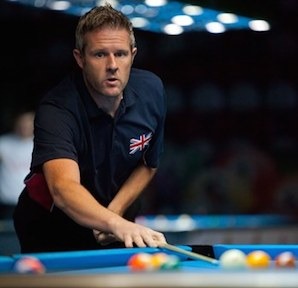 One of the biggest surprises of the day came from a country not normally associated with producing world class pool talents. Abdulrahman Al Amar, a 27 year old from Saudi Arabia, played a brilliant match against the Philippines and world number 12 Johan Chua. Al Amar, who is ranked number one in Saudi, and third in the Middle East, battled toe to toe with the Filipino and outfoxed Chua at the end to win 9-7. It’s only the second time ever that a player from Saudi Arabia has advanced to the Final 64.

“I played very good today,” Al Amar said. But I was really nervous. For one month I was practicing very hard. My goal was to get a good finish in the tournament so I’m very happy to qualify for the final 64.  From here I will do my best. Just one game at a time.”

For the first time in many years, the USA will have two players in the knockout rounds. Mike Dechaine, playing in his first World 9-ball Championship, took down former world champion Daryl Peach, 9-5. Shane Van Boening also won going away, beating Great Britain’s Richard Jones by the same score.

“My break is working really well,” Van Boening said afterward. ”I need to work on a few shots to be more comfortable. I need to go practice more.

“This is the only tournament on my belt that I haven’t won yet. I’ve pretty much won every tournament there is to win, except this.   It would mean a lot to me. If I win the World 9-ball then I can just say to myself, ‘mission accomplished.’”

Several former champions made it through as Mika Immonen continued to impress with a 9-5 win over Germany’s Oliver Ortmann. Japan’s Yukio Akagariyama looked good in his 9-6 win over Taiwan’s  Yang Ching Shun.

Team Poland looks to make a bit of a splash this year as three Polish players advanced. Wojciech Szewczyks, Mateusz Sniegocki, and Karol Skowerski, will all continue on into the money rounds.

Play continues on Tuesday with the final round of the group stages. All matches will be do or die as players vie for the last 32 spots in the single elimination round of 64, which begins on Wednesday. The semi-finals and finals will be held on Friday September 18th.