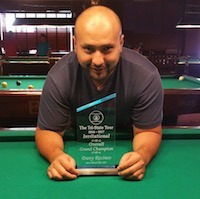 The twentieth annual Tri-State Tour Invitational Tournament took place June 24 & 25, 2017, at Steinway Café and Billiards in Astoria, NY. The weekend was another huge success for the tour with 14 A & A+ Players, 30 B & B+ Players, 32 C & C+ Players and 16 D & D+ Players who earned their way in to compete in their respective classes and play for their chance to be named the Tri-State Tour Invitational Grand Champion. Steinway Café and Billiards hosted the event for the third year and once again provided a great atmosphere and playing environment for the players. Steinway Café and Billiards owner Manny Stamatakis and the staff including Anna and George were as always very professional, helpful and gracious. Manny donated the room and all the table time. Their generosity and support to the players and the event as always were exemplary. The staff and everyone at the room assured the events success. Steinway Café and Billiards, home of the World Pool Series, is an excellent venue for any event, it has professionally maintained tables, a clean fresh atmosphere and some of the most scrumptious food in NYC.

As each day began, organizers John Leyman, Todd Fleitman, Rick Shellhouse & Daniel Cintron congratulated the players on reaching the top of their classes for the season and handed out awards to the top players of the year in each class. The Tri-State Tour added $4000 in cash prizes and the sponsors John Bender Custom Cues, Ozone Billiards, Kamui Tips, Sterling Gaming, Capelle’s Pool Books, OB Cues and the DIGICUE, Pool & Billiards, Professor-Q-Ball’s News, Blue Book Publications, Steinway Café and Billiards, Amsterdam Billiards, and Romer’s Trophies went out of their way to provide the event with excellent equipment and prizes. The sponsors as the Tri-State has always maintained are owed a debt a gratitude for their dedication to the game and the players, their efforts and generosity are what always make the event so special and such a great success and without their continued support of the sport and the players this event could not happen.

Awards were presented to the top 3 players in each class, the Most Improved Player of the Year, and Sportsman of the Year. The most improved player went to Max Watanabe. Max has been a good B level player for years but his game leveled out and he appeared to have reached the top of his game but over the last year Max shattered the ceiling on his game making great strides in his consistency and abilities to become a very strong A class player. His game is still improving at an accelerated pace and it would not surprise the tour if he was back again next year as the most improved again.   Each year the tour awards one player the “Sportsperson of the Year” award. It is awarded to someone the tour believes exemplifies what a player should be and how they should act and this year’s award went to Mike Strassberg. This is Mikes second time winning the award which goes a long way in proving just how much of a true sportsman he is. His exemplary attitude at events no matter what is happening, from players with bad attitudes, to rooms with AC problems, to whatever comes up, proves time and time again what other players should strive to emulate.

The top players of the year in their respective classes were Atif Khan in the A+/A class, Carl Yusuf Khan B+ player, last year’s Grand Champion Jaydev Zaveri winning the B class, the last 3 classes the C+, C and D+/D classes were all won by players who won for the second year in a row. Those players were Tony Ignomirello winning the  C+, Bob Toomey in the C player and Jim Gutierrez in the D+/D class. This year saw some new ladies rise to the top of the leader board with the Ladies Player of the Year being Allison LaFleur. For a full list of winners for all the classes and events, please see the web site www.thetristatetour.com.

The action in the tournament got going around ten on Saturday morning, June 24 with the B+ and B class players along with the D+/D players kicking off the event.  The B+ class was won by some very strong play from Basdeo Sookhai, a former Grand Champion of the event. Basdeo got to the hot seat match against Kirill Safromov and lost to Kirill 7-2. On the one loss side, Basdeo played an exhausted Carl Yusuf Khan who had lost his first match of the day to Basdeo and then fought his way up the one loss side to once again challenge Basdeo. In the semi-final match Carl just could not keep up the pace and Basdeo beat him 7-4. This set up another rematch for Basdeo in the finals against Kirill where Basdeo played above his game and won the match 7-4.

In the B-Class Kevin Scalzitti played extremely well all day and bested all comers to win the B-Class undefeated. In the hot seat match, Kevin Scalzitti beat Kevin Shin on the hill to send him to the one loss side where he met up with Thomas Schreiber, whom he had beaten in the first match of the day 7-5. Thomas played 5 matches on the one loss side to get back to the semi-finals and another shot at Kevin Shin. In the semi-finals Thomas won 7-5 and proceeded to the finals but Kevin Scalzitti was on a roll and beat Thomas 7-4 in the finals.

Kevin and Basdeo squared off in the B+ – B Class playoff and Basdeo continued to play well and sent Kevin home by beating him 7-5.

The D+/D class saw Carlos Serrano play well all day and he cruised to the finals. Carlos played Nancy Chung in the hot seat match and won impressively 6-2. Allison LaFleur, the Ladies player of the year, played her first two matches well but in the third match she came up against Carlos who got a good roll and won the set 5-4. Allison moved to the one loss side and won her next 3 matches to get to the finals and a rematch against Carlos. The rematch was a lot like the first match with each player trading games but ultimately Carlos came out on top for the win.

On Sunday, play resumed at 10 AM with the A+/A players and the C+ class and C class arriving to do battle. In the A+/A class, Jimmy Acosta dominated all day never letting his opponents get more than 3 wins against him and he arrived in the finals undefeated. In the hot seat match he crushed his opponent Elvis Rodriquez 7-1. Mike Panzarella who had lost his second match of the day to Atif Khan 7-3 fought his way up the one loss side getting stronger as the day went on. In the semi-final match he faced a tough opponent in Elvis and won a tight battle on the hill. Mike continued to get stronger and faced off against the dominating Jimmy and Mike fought hard and won the match 9-5.

In the C+ class Nathaniel Raimondo sent Dany Recinos to the one loss side in the hot seat match with a score of 6-1. Dany then battled back for a rematch with Nathaniel beating Kevin Chong on the hill. In the finals, Dany continued to play well and handed the undefeated Nathanial a loss and second place by beating him 8-6.

The C Class was taken over by Qian Chen who kept all opponents to 4 wins or less to win the division undefeated. In the how seat match Qian beat Pashk Gjini 6-3, Pashk went to the one loss side where he lost to David Grant 6-4. David arrived in the finals with his only loss of to the day to Qian 6-4 but Qian was just as good the second time and won 6-3.

This left 2 winners from Saturday and 3 winners from Sunday to do battle for the Grand Champion title. The C+ versus C class final saw Dany Recinos continue to win as he bested Qian Chen 6-3. That set up the 2 overall semi-final matches. The first to be played was the A class versus the B class and both players played very well but Mike Panzarella was not going to be beaten no matter how well Basdeo Soohai was playing and Mike won the match 7-4. The C class versus the D class was almost a mirror image of the other semi-final match with the higher level player, Dany Recinos, playing stronger and the lower level player, Carlos Serrano just not able to keep up and he lost 7-5. This setup the finals of the event between A class Mike Panzarella and C+ Dany Recinos. Both players played well but the long day and tough matches obviously took its toll on both players as they traded games. As the set went on both players made some crucial mistakes by over rolling some positions and not making some game wining shots but then would come back and do exemplary runs to win games. In the end Dany Recinos would be the one to sink the final 9 and win the event to be crowned the 2016-2017 Tri-State Tour Invitational Grand Champion.