A devoted family man and a professional pool player, Lou Butera passed away on June 25, 2015 from complications of Parkinson’s Disease. 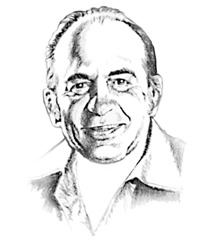 Butera was inducted to the Billiard Congress of America’s Hall of Fame in 1986 with this bio: “Lou Butera was born May 15, 1937 in Pittston, Pennsylvania.  He learned to play at his father’s pool room in the small coal-mining town.  After watching BCA Hall of Famer Erwin Rudolph in an exhibition, 14-year-old Lou decided to devote his life to pool.  He was runner-up to Irving Crane in the 1972 World Championship in Los Angeles.  In 1973 he defeated Crane in the finals of the same event to win his first World Championship.  Nicknamed “Machine Gun Lou” for his rapid fire style, Lou recorded a 150-ball run against Allen Hopkins in just 21 minutes in 1973.  Butera has since won numerous titles.” 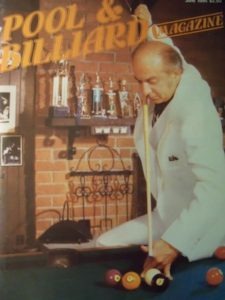 Lou Butera appeared in several films as an actor and technical advisor. He had a cameo appearance as himself, in “The Baltimore Bullet”, “Police Academy 6” and was the technical adviser in the 1984 film “Racing with the Moon” along with another cameo appearance. Other t.v. and film credits and appearances that all contributed to shining a spot light on the cue sports included A.M. America, Fall Guy, Tomorrow Show, Challenge of the Sexes, Bridget Loves Bernie, The Rookies, Mannix, Stone, Kojak, B.J. & the Bear, Gunsmoke, Fitz & Bones, Wide World of Sports and Guiness Game and Sports Legends.

In 1972 he was second in the World 14.1 to Irving crane.  In 1973, at the age of 35, he defeated Crane for the World title. Other major titles include the 1974 U.S. Classic Billiard Championship, he was the 1974 All Japan Open champion, and was crowned the 1981 ESPN King of the Hill Pool Champion at the Sands Casino in Las Vegas.

Lou Butera on the June 1986 cover of Pool & Billiard Magazine

Lou Butera was preceded in death by his wife Caroline who passed away in 2012. Lou and Caroline had seven children and many grandchildren.