For the Predator Pro/Am Tour’s fifth stop of 2016, players from around the New York City area headed to the south-side Brooklyn neighborhood of Gravesend to battle at Gotham City Billiard Club on March 19-20. Voted the “Best Pool Hall in Brooklyn,” Gotham is known as one of the only rooms in the area to feature Diamond tables, and draws strong turnouts for the tournaments held there. 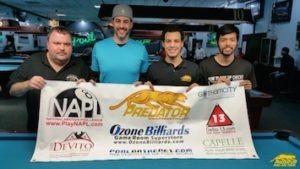 At this event, a total of eighty-four players turned out to compete in the Amateur 9-Ball division, while thirteen competed in the Pro 10-Ball division. Along with the player-friendly atmosphere at Gotham, the $3,000 in added prize money was a big draw for competitors, with $1,500 going to the prize funds for each division’s payouts. Throughout the weekend, a free live stream was provided by AZBtv and hosted by “Upstate Al” Leon.

In what would become an international battle between a New York-veteran player and a newcomer to the tour, action in the Amateur 9-Ball division got underway at 11am on Saturday, March 19 due to the early turnout and close of the lower bracket. 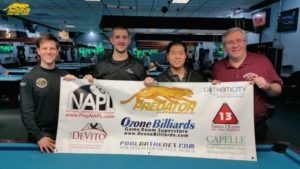 From the half of the chart featuring “D” through “B”-level players, tour rookie Nayan Roy found his way to the final through the winner’s bracket. Roy, an accounting student who hails from Bangladesh, India, first began playing on the Predator Tour at the beginning of the 2016 season and already has begun to stand out.

In the tour’s previous event (Stop #4 at Cue Bar), Roy took third place, only to continue his hot streak going through the winner’s bracket at Gotham. After a first-round bye, Roy had a six-match run which culminated in a 7-6 win for the “hot seat” against Steve “The Russian” Astashen.

On day two of the tournament, before his match against Roy, Astashen topped off a five-match run with a win over Riyadh Benghalem of Algeria. Benghalem, who first began playing on the tour in 2015, has also become known as a threat this season, having earned a number of high finishes thus far.

Benghalem stayed in the fight after his loss to Astashen, going on to defeat Willy “Shorty” Santiago (7-6), followed by another close battle in the quarterfinal match against Dan Faraguna (7-6). The semifinal was rematch time for Benghalem and Astashen—Astashen soundly won with a score of 7-2.

In the final, Astashen had his second rematch of the tournament—this time against Nayan Roy. The format for the match was a modified single race to seven games. If Roy reached seven first, he would win the match outright; if Astashen made it to seven first, the set would extend to nine games. This rule came into play as Astashen took seven first, and ended in a 9-8 win for Astashen, his first-ever tour victory.

While the amateur players worked through their final rounds of competition, some of the area’s top open and pro-level players battled it out at Gotham. Included in the lineup of headlining players were Gotham house pro Jorge Rodriguez, Predator Tour founder Tony Robles, Mike Dechaine, Hunter Lombardo, Mike Wong, Frankie Hernandez, and eventual winner Jayson Shaw.

Shaw, who recently returned from a trip to Europe with his wife and daughter, landed in the final undefeated after wins over top amateur Koka Davladze (7-3), Mike Dechaine (7-4), Hunter Lombardo (7-6), and Mike Wong (7-1).

Following his narrow loss to Shaw, Lombardo put in a strong performance, defeating Tony Robles (7-4) and Jorge Rodriguez (7-1). Lombardo then matched up against Wong for a gritty battle in the semifinal. Wong got out to an early lead, reaching the hill first at 6-3. Lombardo kept the heat on to tie the match at 6-6, but the last rack ended in Wong’s favor, landing Wong a rematch against Shaw in the final.

The match for the title also went down to the wire as Shaw and Wong traded racks. With the match tied at 10-10, Wong was poised to score an upset win, but a positional error proved costly. Shaw took the opportunity given to close out the match 11-10 and walked away with the title.

Alongside the the Pro 10-Ball event, a “Second Chance” tournament was also held on day two, for players who had been eliminated from the amateur 9-ball division. The top finishers in this event would be Chris Kelly and Koka Davladze, who split the first and second place prizes.