The Predator Grand Final Will Take Place from January 17-20 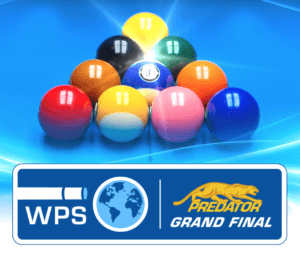 After a poll on the WPS Facebook page, the fans have decided that the players will be playing 10-Ball during the final event of the 2018 season. With XX%, it was a convincing win for one of the newer disciplines in the pool world and one which has won over the hearts of many fans and players.

With just over $10,000 collected over the first three tournaments, the sponsors will be adding money to take the total added monies to the prize pool up to $25,000 in total. The WPS has taken on the feedback received over the season from the players and fans which prompted us to change the format of the whole tournament. The Grand Final has now been opened up to players of all levels which will be divided into two tiers (organizer’s discretion will be final):

– Tier 1 has been set up for the professional and semi-professional players which will give them access to the Grand Final and the chance to win the estimated first-place prize of $10,000 (based on a field of 128 players).

– Tier 2 gives amateurs, ladies, juniors under 18, and league players a chance to compete against some of the best players in the world for a reduced entry fee. But that’s not all, their entry fee also includes an entry for the Poison Challenge Event which is only open for Tier 2 players who have participated in the Grand Final which will have an estimated prize pool of $2,000.

The earlier you sign up and pay, the better as the entry fees will be dependent on when you enter:

But that’s not all! The WPS will also organize a qualifier on January 21 for the Matchroom US Open 9-Ball Championship which will take place in the Mandalay Bay, Las Vegas from April 21-26 and features a guaranteed prize fund of $300,000! The entry fee will be $100 and the full details will be announced as soon as possible.

Live-scoring will be provided thanks to our partners at CueScore. Post day and match write-ups will be available thanks to Keith Paradise. Admission to the venue will be free so anyone who wants to watch in person is welcome to grab a seat and take in all the action from up close.

For the complete details on the event, format, and/or rules, please visit our tournament page. Players that want to register can email info@worldpoolseries.com for the payment details. We are excited to close out the season with a bang and hope you will all join us to see who will take the final WPS title and trophy back home with them!

The last event of the 2018 World Pool Series, The Predator Grand Final, is being held at Steinway Billiards in Astoria, Queens, New York City from January 17-20, 2019. The World Pool Series is sponsored by Predator, Poison, Aramith, Rasson, Iwan Simonis, Tiger, and Kamui. Our suppliers and partners are Billiards Digest, CueScore, Let’s Go Print, Outsville, UpState Al, and the WPA.