It was the toughest field to date at pool’s  Midwest Ladies Regional Tour Stop #8, Sat, November 14, at Louisville Billiards Club, Louisville, KY. Nearly half of the 15-player bracket was made up of women who have competed in the pro circuit. Tied for first place in points were Debbie Cervantes and Angela Williams. Christy Dickerson was hot on their tails in second, so the tournament champion would be a mystery until the end of the tournament. The morning started off with three groups of five in a round-robin bracket.

Group A saw Terri Kelley come out on top with 4 wins, beating out two-time champ Christy Dickerson, as well as Amee Schmidt, Kindra Hurlbert, and Lydi Davidson. Also advancing was Dickerson who had 3 wins.

Group C was the tightest competition. Angela Williams won the group with 3 wins, losing only to Charlotte Ashley, and beating Connie O’Heron, Angela Mears, and Monica Hill. O’Heron finished second in the group with 2-2 record, 15 total game wins, and having beat Mears. Coincidentally, Mears and Ashley had the same performance stats and both women also advanced to the final double elimination board. 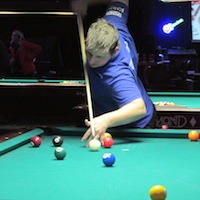 Kelley continued her victory streak, winning against both Mears (5-2) and Dickerson (5-3). Taking a commanding lead, Lovely pounced on Ashley (5-2) and Patton (5-4) before coming up against the other undefeated player, Kelley. The match was harsh, Kelley delivering a beating to Lovely with an early lead of 4-0. However, the young Lovely answered back in spades, demanding our respect with an impressive 5 game streak to win the chair!

On the B-side, a couple of early favorites were defeated: Williams lost to Patton and Ashley, finishing 7th with Mears, who lost her B-side match to O’Heron. Unfortunately for them, O’Heron and Ashley lost their next matches. Patton and Dickerson advanced to the quarter finals where Dickerson prevailed (5-2) anxious to get another shot at Kelley.

The next set between the two heavy-hitters was intense. Kelley made an error on the third match, missing a 9-ball combination and leaving the table open for Dickerson to take the lead 4-2. Kelley managed to rally for one more win, running out a flawless rack. However, Dickerson was not giving up that chance again, and battled safeties in the last game to come out victorious 5-3. 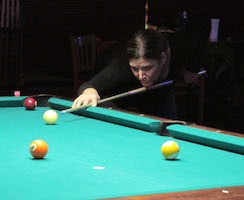 The finals match was a surprise. Lovely and Dickerson, well-matched in skill and discipline, seemed as if they’d be dueling to the death. However, Dickerson hit a bump in the road, and Lovely was taking no prisoners, not giving up a shot at the table. Lovely came out with a 4-0 lead, confident and on point. Dickerson struggled, hooking herself more than once, and fighting the frustration. She managed to get a game from Lovely, and it looked like she may make a comeback. However, as soon as Lovely got to the final table and finished the match 5-1, undefeated!

Angela Williams’ 7th place finish sealed the deal for her 2016 tour championship! Dickerson’s 2nd place put her only 75 points behind Williams, and she tied with Lovely for second place. Williams won a Poison Anthrax Cue, and will receive the first invitation to the Regional Tour Championships, to take place January 7-10th at Zingale’s Billiards in Tallahassee, FL.

MLRT will hold the 2016 Stop #1/WPBA Masters qualifier tournament on December 5, 2015 at Michael’s in Fairfield, OH. Adina and Marc Pelletier have sponsored the event, so the winner will get paid entry into the WPBA Masters, to be held February 3-7, 2016 at Soaring Eagle Casino & Resort. Additionally, Michael’s will add $1000 (based on 32 players)!