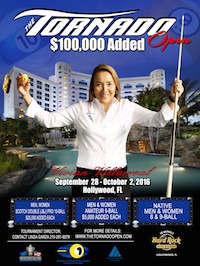 The Texas Tornado began playing pool when she was eight years old, and she dominated local tournaments right away, compiling over 200 trophies before she was a teenager. But Vivian abruptly stopped playing to play other high school sports, where she excelled at basketball and volleyball.

Luckily, she returned to pool while in college. She took her basic classes and thought about accounting, but got back into pool and wound up being a professional billiards player.

In the past 20 years, she has amassed 19 titles, including the 1992 National Championship and the 1996 ESPN World Championship. But the win she remembers most is the 1992 Kasson Classic, which propelled her to number o­ne, where she remained for five years. Since then, Vivian hasn’t fallen out of the top ten.

Born January 30 in San Antonio, TX, Vivian Villarreal has been voted one of the most entertaining and exciting players to watch male or female. Her nickname, “The Texas Tornado,” not only refers to her whirlwind ability to run through racks but also to her mercurial emotions on the table.The “Texas Tornado” nickname is fitting for this animated billiards champion, who hails from San Antonio and is one of the world’s leading Hispanic sports personalities. Villarreal’s exciting, interactive pool playing style has pushed the popularity of the sport to it’s highest level. Her fans have a special way to cheer the “Texas Tornado”. They spin their fingers, tornado-style, and mimic the sound of the rushing air.

She has been on many magazine covers such as “American Way”, “Pool & Billiard Magazine”, “People En Espanol” and “Billiards Digest”. She has also made many television appearances, including “Good Morning America”.

Villarreal is sponsored by Navigator Tips. Her fondest pool-playing memory is defeating Minnesota Fats at the age of 8.

To learn more about Vivian, please visit her website at: www.vivianvillarreal.com or her Facebook page at: Facebook/Vivian Villarreal