In June 1990 the seasoned road player, Roger Griffis, decided to test his skills against the top pros on pool’s tournament scene. He headed to Reno, Nevada and entered the Sands Regent 9-Ball Open XI. 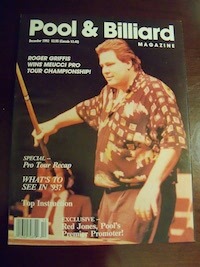 Earl Strickland won that event by defeating Roger Griffis in the finals and holding him to the runner-up spot. Kim Davenport took 3rd. But Roger had proven he belonged with these legendary players. To get 2nd place he bested players such as Johnny Archer, David Howard, Mike Massey, Steve Mizerak, Jeff Carter and Efren Reyes.

Strickland told Griffis after the tournament, “I appreciate you getting all those champions out of my way. You played a beautiful tournament.”

Following the Sands Regent event, many of the pros headed to California to play in Jeff Bey’s Hollywood Billiards Open 9-Ball Championship.

As if to prove his earlier runner-up spot to “Earl the Pearl” Strickland wasn’t a fluke, Roger Griffis, the tour rookie, came away with the 1st place trophy this time. He defeated the Philippine Champion, Efren Reyes in the finals by a convincing 11-4. Johnny Archer took 3rd.

Roger Griffis had found a home on the pro tour and became known as “Rocket” Roger Griffis for his explosive break and aggressive style of play. 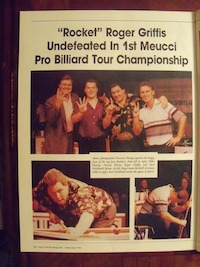 The finals came down to a re-match between “Rocket Roger” and “Earl the Pearl”. This time Griffis took the honors by defeating Strickland in the ESPN televised match 11-9. He had climbed to the top of his sport. 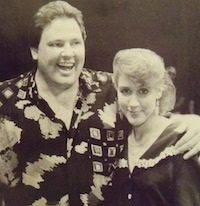 Among the many condolences appearing on social media as the news of Roger’s passing included this one from Shane VanBoening:

“RIP Roger Griffis. I met him and played him in Dallas, Texas when I was 20 years old. He sure was fun to play against. Played him 50$ a game for a whole week and broke even… Great player and great guy, he will be missed. Thanks for the game Roger!”

“Peace out to my brother-in-law and former ESPN Masters pool champion Roger Griffis, whose billiard skills were almost as legendary as his contagious laugh. He passed peacefully last night after several years battling diabetes; his children were there to say goodbye and he died holding his wife’s hand. Sending lotsa’ love and condolence hugs to my incredible twin, Kiki Griffis, and their three amazing children, Hannah, Lizzie, and Roger Jr., and to his daughter Laura Tuell Barton — your courage and strength and sense of humor are testaments to the life he lived and will continue to endure through you.” 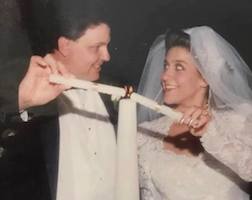 Karin went on to say:

“Diabetes is taking a brutal toll on so many American families – if you’re looking for a charity to which to donate, please consider one of the following and, in lieu of gifts, please consider donating in Roger’s name: http://insulinnation.com/…/rating-5-popular-diabetes-non-p…/

(EDITORS NOTE: Roger Griffis had a personality fit for the saying “Bigger Than Life”, as he truly was. He holds a special place in the hearts of many, especially we at P&B Mag. His wife Kirsten was P&B’s Office Manager in the late 80’s and early 90’s and Roger eventually became a P&B Player Representative. Publisher Harold Simonsen, his father-in-law and Executive Editor, Shari Stauch, his sister-in-law.)

Pool & Billiard Magazine will present a special tribute to Roger in the July, 2017 issue.