On the weekend of January 16-17, pool’s New York’s Predator Pro/Am Tour made its 2016 debut at Steinway Billiards in Astoria, NY (Queens), with the tour’s season-opening event. As the tour has now begun its ninth season of offering players both top-level amateur and open/pro competition, participation from players from around the Tristate area has remained consistently strong, while also adding more players from the local league communities.

Carmine Andujar, who is a longtime Queens-based league player, joined the tour-sponsoring National Amateur Pool League (NAPL) in 2012, and competed in his first two tour stops in 2015 in the season.

As a newcomer to tournament competition, Andujar described the benefits he took from the event. “I enjoyed hanging out and playing with the pros and some of my good friends. They correct my mistakes, and help me improve my game with great advice,” he explained.

It is the camaraderie and continuous challenges of tournament action that keep many players returning year after year, and the strong turnout of 118 players for the two-day Amateur 9-Ball event was a testament to that. The event, which uses an A/B/C/D handicapping format, began at noon on Saturday and continued through the day before picking up again on Sunday morning.

For the Predator Tour’s format, players are divided into two separate preliminary brackets, one consisting of novice and intermediate players (ranked D through B) and one for advanced and upper-level amateurs (rated with B+ through A++ handicaps). As the tournament moves into the final stages, the players from the two groupings meet at the top. 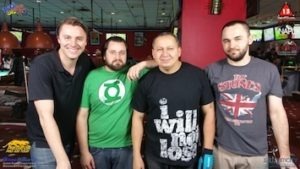 In the B/C/D bracket, four players made it through to the second day of competition without a loss. One of the two pairings featured New York-based players Brad McDuffie (D+) and Erick Carrasco (C), both of whom had standout performances in this event. Both players were certainly hungry to make it to the top of the bracket, and this match proved it, as the score went down to the wire at 6-6 before Carrasco came out on top to win the match-determining game. The other “final four” match-up for the bracket was also a barn-burner as longtime tour player Rene Villalobos (B) narrowly defeated the junior phenom from Connecticut, 15-year-old Lukas Fracasso-Verner (B), 7-6. In the next round, Erick Carrasco continued to stay strong and defeated Villalobos 7-5.

Coming through the A++ through B+ bracket was the eventual undefeated winner, Alex Osipov. Osipov broke out of a dry spell on the tour at the season opener, winning his first tour stop since 2012. In the final four round of the upper bracket, Osipov defeated Kapriel Delimelkonoglu with a close 7-6 score, while Ross Lacy (cast member of The Hustlers) won 7-4 over Riyadh Benghalem. To line up a winner’s bracket final match against Erick Carrasco, Osipov soundly defeated Lacy with a score of 7-4. A 9-6 victory over Carrasco would then seal Osipov’s place in the final match. 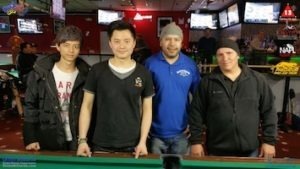 Meanwhile, on the one loss side of the bracket, Gotham City Billiards-based player Emit Yolcu had a strong comeback performance. The recent Tri-State Tour winner had an early loss, but fought back through seven rounds to eventually tie for 5th/6th place. In that round, Yolcu was defeated by Rene Villalobos (7-6), while Ross Lacy overcame Riyadh Benghalem for the second time in the tournament with a 7-5 win. Lacy continued to surge ahead, eliminating Villalobos by a score of 7-5 in the quarterfinal to then take out Eric Carrasco 10-6 in the semi.

In the final round, Lacy got his chance for a rematch against Alex Osipov. This match would turn out to be a fight to the very last game, as they battled to 6-6 before Osipov emerged undefeated to claim the title. While Osipov has been a perennially strong tournament player in the area, this proved to be a great breakout performance for Lacy, who is not often seen in tournament competition.

On day two, the Open/Pro 10-Ball event stirred up a lot of buzz, as two of the biggest names in pool to come out of Taiwan were headlining the event: Ko Pin Yi and Ko Pin Chung. On the Friday before the tournament, Ko Pin Yi (the 2015 World 9-Ball and World 10-Ball Champion), completed his three-day challenge match against former World 10-Ball Champion Dennis Orcollo, which also took place at Steinway.

With a few days remaining before the Ko brothers make their way to the 2016 Derby City Classic, this would be their final tournament before they head to the big stage. Along with the Ko brothers, four visiting players from Russia were also in action at Steinway in preparation to depart for the Derby: FedorGorst, Andrew Seroshtan, Max Dudanets, and Yuri Kismereshkin.

However, the winner’s bracket of this event would belong to New York, as 2015 Empire State Champion Jorge Rodriguez would be the player to beat. To get to the top, Rodriguez defeated Hunter Lombardo 7-3, Chris Derewonski 7-6, Max Dudanets 7-2, and in a treat for the local fans, took down Ko Pin Yi by a score of 7-5 to claim his place in the final.

As for Ko Pin Chung, he was dealt a winner’s bracket loss by his older brother, in a match where he was unable to strike up much momentum and fell at 7-3. In the loss bracket, Ko Pin Chung did not have much difficulty, defeating 2015 Predator Pro Player of the Year Zion Zvi 7-4 and top Joss Tour player Nelson Oliveira 7-1 to make it to the semifinal. Ko Pin Chung was then able to avenge his loss to his older brother, taking down a 7-6 victory over Ko Pin Yi to move on to the final. At this point, finalists Jorge Rodriguez and Ko Pin Chung opted to end the tournament there and share the victory at the end of the day.

In addition to the two main events, in 2016 the Predator Tour introduced the addition of a single-elimination “Second Chance” tournament, which is open to the amateur players who were previously eliminated from the A/B/C/D 9-Ball event. At Steinway, there were enough players to hold two rounds of bonus tournaments, a Second Chance and Third Chance event. Tour regular and former winner Miguel Laboy took down the Second Chance tournament, while Lukas Fracasso-Verner was the winner of the Third Chance.

In total, between the two main events and the second chance tournaments, a total of 166 players competed over the course of the weekend. Congratulations to the winners and top finishers!

Next up on the Predator Pro/Am Tour will be Stop #2 at Steinway Billiards on January 30-31.