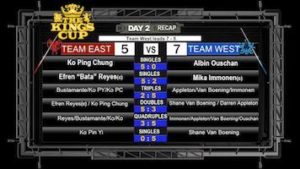 Team West survived an early rally from Team Asia on Day 2 of pool’s inaugural Kings Cup. Asia came out strong winning the first 9 games in a row which equated to 2 match wins to level the team scores at 4-4. But the West’s ability to come together cohesively in the triples and 4-on-4 matches made all the difference. Plus their secret weapon, lone American Shane Van Boening who is undefeated in his singles matches. 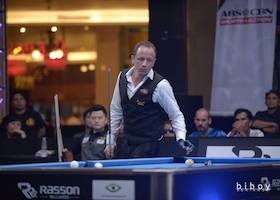 Van Boening was out for revenge, and his European peers were more than happy to send him in to get it

Never before have two teams been so stacked with skill and talent. The inaugural Resorts World Kings Cup will mark the first time Europe and USA join forces to face again the greatest players of the Asia with Philippines and Taiwan also joining forces for the very first time in history! European and American champions will go against Asia’s champions on November 19th at Resorts World Manila  in the inaugural Kings Cup! In what surely will become the most epic rivalry in cue sports, the pool world is about to get rocked in a war that fans have been dreaming about for years. Dragon Promotions is pleased to produce the Kings Cup, a three day contest to declare which side of the world boasts the strongest players, the East or the West. On November 19th-21st  2015, the world, as well as the players themselves, will find out!  Four players on each side have been selected to represent their continent.

The Kings Cup is hosted by the award winning casino Resorts World Manila , produced by Dragon Promotions and aired on ABS-CBN Sports Channels for 12 hours of coverage and replays. The event will be played on the beautifully designed Rasson Table using  Andy Cloth, Viking Cue, Cyclop Balls while the players will wear prestigious clothing made by FA Clothing Company. Puyat Sports, Pool & Billiard Magazine, and Billiards Digest are also co-sponsors.

Despite numerous road closings and massive gridlock traffic due to APEC, a packed house made their way to the inaugural East meets West where the world will find out which is the greatest team in the world.  Kings Cup’s Asia vs Europe/USA , The Real Rivalry starts November 19th. The Legend begins…

“I played well yesterday, but today I had little chance against Ko Ping Chung. But I played well in our triples and 4-on-4. I think Chung is playing the best on their side, but Shane is playing better than anyone in this event”, said Ouschan. 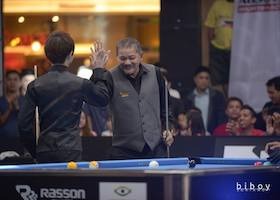 This seemed to fire up the Captain as Efren Reyes took the floor against West Captain Mika Immonen in their singles match-up. Efren looked like a new man from a day earlier, while Mika didn’t look sharp at all. Reyes took full advanatge of Immonen’s final error in a hung up 9-ball to close the set 5-2.

With Asia now hot on the heels of the West , the score was level again for the third time of the Kings Cup! 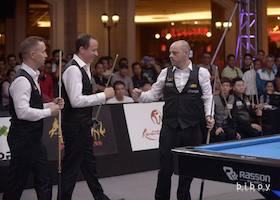 Next Bustamante and the Ko Brothers took on Van Boening, Appleton, Immonen in the triples. The Asian trio stormed to a 2-0 lead and it looked like the momentum swing would be too big for the West to bear. But a position error by Bustamante gave breathing space to the West. Immonen redeemed himself with excellent long shots to keep his teammates in the match. When Django botched a 10-ball carom, Appleton finished it off with a carom combo of his own on the 10-Ball. West regained the team lead 5-4.

Immonen wasn’t his best yet on the table, but has definitely been the spirit of Team West in being the leader.

Reyes decided to pair himself with the younger Ko instead of the more renowned World #1 Ko. The Magician’s decision making paid off as “Little” Ko made tough shot after tough shot to help pave the way for a 5-3 win over Van Boening/Appleton.

For the fourth time of the event, the scores were level!

Next was the 4-on-4 and this one was close as Asia led 3-2, but again the West showed its grit and eeked by with a 5-3 win to regain the lead again for the fourth time.

Though most of the time intense, there were moments of lightness. Django had a wardrobe malfunction.

The final match of the day was a captains pick, and for Team West it was a no-brainer. Captain Mika chose Shane Van Boening with the complete shared view of his European peers. So the lone American was sent in to finish the job and he would have to face the opponent whom he had never beaten before yet, World Champion Ko Pin Yi. Ko had just defeated Shane for the world title just weeks ago. Efren’s strategy in choice was sound considering Shane had never beaten him. If Ko won, Day 3 would start even at 6-6. But SVB was on a mission. He played with a fast rhythm and seemed to stalk the table with a renewed purpose. Playing lock tight defense and never missing a ball, Van Boening shut the world #1 out 5-0 to give his team a 2 match cushion going into the final day.

The World #1 could only sit and watch Van Boening’s onslaught.  Captain Immonen embraces Shane after the crucial win.

“It feels good to redeem myself. I wanted revenge”, said Shane after the win. The vindication was clear when Shane, normally very docile, raised his arms in victory.

“I didn’t play well today because I couldn’t get a feel for the table today. I had some bad misses. Bad playing in my singles and doubles matches. Fortunately I played well in our triples and 4-on-4. And Shane came through for us today in the end”, said Appleton.

Team West has the distinction of not dropping any matches in the triples or quadruples.
And that has made all the difference in the Kings Cup.

“We have good chemistry. Everyone is supporting each other. Plus we communicate all in english and that’s an advantage”, said Immonen on explaining their uncanny success in the group matches.

“I think it says a whole lot when you have a group of European champions, and they want you to be the one to play for the team against the best player in the world. It’s pressure, but also an enormous confidence booster”, said Charlie Williams, executive producer of the Kings Cup.

“I really like playing with these guys. None of us have to worry about each other. We are all champions”, said Van Boening.

Day 3 finale will start 6:00pm Manila time and 5:00am NYC. Matches will be available live and later for On Demand at KingsCupPool.com.