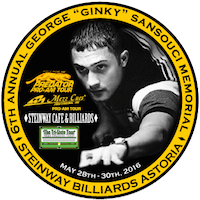 The tournament’s namesake, George SanSouci (08/08/71 – 03/08/11), known by most as “Ginky,” was one of the most accomplished players on the East Coast in the nineties. Dominating regional tournaments and action in poolrooms, he was one of the fiercest players in New York City. Ginky achieved numerous titles on the national level as well, including the National Straight Pool Championship, the BCA Open 9-Ball Championship, and the Derby City Classic 9-Ball Championship, to name just a few. His passion and discipline for the sport was bolstered by his unforgettable style and charisma, leaving an impression on those who crossed his path. As both an inspiration and a friend, Ginky influenced many players in New York City and beyond, making the Ginky Memorial one of the year’s most-anticipated tournaments.

At the end of three full days of grueling competition at Steinway Billiards in Astoria, NY, two new champions were crowned at the 6th Annual George “Ginky” SanSouci Memorial. Amateur Tony Liang emerged victorious from the loss-side of the Amateur 9-Ball event, while Zion Zvi stormed through the Pro event field undefeated. 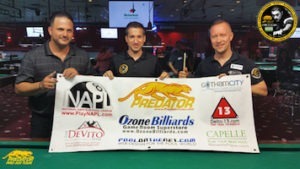 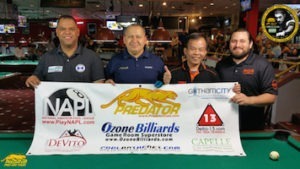 The 2016 edition of the event was held May 28-30, and drew a total of 244 players between the Amateur 9-Ball and the Pro 10-Ball events. This tournament, held annually over Memorial Day weekend, is a collaborative effort of three of the top East Coast pool tours: The Tri-State Tour, Mezz Pro/Am Tour, and Predator Pro/Am Tour. In addition, Matchroom Sport designated the Pro event as a Mosconi Cup Team USA Ranking Event on the Predator Pro/Am Tour.

Bright and early on Saturday, May 28, the amateur 9-ball event kicked off with a resounding crack as all the players broke at once. Each year, Tony Robles honors George “Ginky” SanSouci with this gesture as he loved to hear this sound. “Ginky’s sure to be smiling as he looks down upon us,” said Robles. Players also took time earlier to recognize the recent passing of Ron Vitello, creator of the “90/90 Aiming Method” and beloved teacher and mentor of many in the New York area. Predator Tour player Izzy Matos, who was a friend and student of Vitello’s, offered words in his memory and asked for a moment of celebration of his life instead of the customary silence.

The Amateur 9-Ball Division brought in an impressive number of players hailing not only from the Northeast, but also from as far away as Mississippi, Florida, and Missouri. While numerous out-of-state players came to put in their bid for the coveted Ginky Memorial title, it was the local New York-area players who showed their dominance in both the amateur and pro events. In fact, both of the players who landed in the amateur event final call Steinway Billiards home and are regular competitors on the Predator Pro/Am Tour and The Tri-State Tour.

With the record-breaking field of 190 players, the tournament operated on two 128-player charts (one A++ to B+, the other B to D) before joining into one small chart. This final chart consisted of the top four amateur players, two from each chart – a player from the win-side and one from the loss-side each.

Juan Guzman (rated A+) was the first player to emerge from the upper chart to await the “hot-seat” match. A student of Ron Vitello’s, Guzman was highly motivated to perform well in this memorial event. Guzman won six straight matches before meeting up with Eddie Kunz (B+) on the 3rd day of the tournament. After this 7th victory (7-3), Guzman faced off against Rene Villalobos, victor of the win-side of the lower chart, for the hot seat.

Rene Villalobos (B), another regular on the Predator and Tri-State tours, battled his way through the win-side of the lower bracket. Out of the six matches he played to reach Guzman, three went hill-hill. Despite his valiant efforts to reach the hot seat, Villalobos was thwarted by Guzman (8-4) and kicked to the loss-side.

Meanwhile, on the loss-side of the upper chart, former Predator Tour stop winner Tony Liang (A+) was busy making his comeback. After winning three win-side matches, Liang was sent to the loss-side by Richard Ng (7-5). Liang fought his way through the bracket, tallying up five additional wins to reach the final chart.

From the lower chart loss-side, Erick Carrasco (C) was the player to rise to the top. This season, Carrasco has been making waves on the Predator Tour, and his performance here was no exception. He successfully worked his way through the win-side of the chart, defeating six opponents before falling to Rene Villalobos (7-5). He followed up with a closely-battled match against Chickie Romero (B), in which he narrowly escaped 7-6 to move on to the final small chart.

Down to the final four amateur players in the Ginky Memorial, Tony Liang and Erick Carrasco squared off in the quarterfinal. Carrasco, starting with five games on the wire in a race to ten, took full advantage of Liang’s early struggles and scored the first three games to take a daunting 8-0 lead. All was not lost for Liang, however, as he got into gear and took the next ten racks to win 10-8.

While the undefeated Juan Guzman waited in the hot seat, Liang and Rene Villalobos faced off in the semifinal. Although Villalobos was spotted three games on the wire in this match, he was unable to hold back Liang, who finished it off with an 8-5 final score.

In the final match, featured on the AZBtv live stream, the format was a single “extended format” race to seven. As the undefeated player, if Guzman won seven first, he would win the title outright; if not, the set would extend to nine. At the beginning of the match, Liang held the momentum and got out to a 4-1 lead. Although Guzman made progress to only trail by two games, he never quite caught up. Liang stayed in control and went on to upend Guzman, landing a 9-6 final score, to emerge Amateur champion of the 6th Annual Ginky Memorial.

In the winner’s bracket, two New York-based, Mezz Cues-sponsored players were on a track to meet in the “hot seat” match: Zion “ZZ Top” Zvi and Mika “The Iceman” Immonen. On the path to meet Immonen, no opponent posed a real threat to Zvi. Six games was the most anyone managed to score on Zvi’s road to the hot seat: Yusuf Khan (9-4), Paul Oh (9-6), Hunter Lombardo (9-3), Bucky Souvanthong (9-6), Jonathan Smith (9-4).

As for Immonen, he had close calls in matches against Jeremy Sossei and Mike Dechaine (both 9-8 scores) before defeating Sean King (9-6) and Tony Robles (9-5) to meet with Zvi. Zvi came out of the gate hot against Immonen, and went on to defeat the former US Open champion with a score of 9-5.

After suffering an early loss in the winner’s bracket, Alan Rolon, a dark horse from Puerto Rico, made his name known to all at Steinway. After Rolon was dealt a round two loss by RJ Carmona (9-6), there was much more for him to accomplish. Rolon went on to win seven straight matches including notable wins over Shaun Wilkie (9-6), John Morra (9-7), and Jonathan Smith (9-7), which put him into the quarterfinal.

Mike Dechaine, Rolon’s opponent in the quarterfinal, took a similar road to get there. Dechaine lost a close battle in the third round to Mika Immonen (9-8), which he followed with a five-win run. In the match to determine 5th/6th place, Tony Robles got out to a 4-0 lead over Dechaine before an error allowed Dechaine to run away with a 9-4 win and onto the quarterfinal.

In the quarterfinal, Alan Rolon went toe-to-toe with Dechaine. The match went down to the wire. The score was 8-8 when Dechaine suffered a crushing moment – he scratched on the break in the final game and Rolon ran out the rack. It was then down to Rolon and Immonen in the semifinal to fight for a chance at the title against Zvi. The Iceman held nothing back in this match, giving no room for Rolon to get started. A final score of 9-2 ended Rolon’s impressive loss-side run and sent Immonen into a rematch against Zvi.

Waiting out the Amateur final, the Pros finally took center stage shortly after midnight. With a room full of spectators, Immonen was the first to mark a bead on the wire, and got out to a 2-0 lead. It did not take long, however, for Zvi to erase the lead and tie it 2-2. From then on, the match stayed closely tied while the crowd at Steinway and on-line stayed closely tuned-in to the battle between Immonen and Zvi. The score went back-and-forth to the end: 6-6, 7-7, and finally 8-8. At this point, with the “extended format” single race to nine, Immonen could stretch the set to eleven if he won the next rack. Ultimately, however, Zvi prevented him from having the chance, walking away with a 9-8 win and crowned – undefeated – the 6th Annual George “Ginky” SanSouci Memorial Pro Champion.

Following his win, Zvi acknowledged the staff of Steinway Billiards and the three tours in a post on social media, in addition to sharing his personal connection to winning the event—a testament to how Ginky impacted players in the community. “This means the world to me because Ginky was a true friend,” said Zvi.

Among the vast array of spectators were Paul Costain and his wife Jill, owners of Predator Cues (a sponsor of Predator Pro/Am Tour), and Phil Capelle, author of numerous pool instructional publications.

The staff of all three tours would like to give special thanks to all of the players who competed this year and helped celebrate Ginky’s legacy. We also want to express our deepest condolences to Ron Vitello’s family and friends.