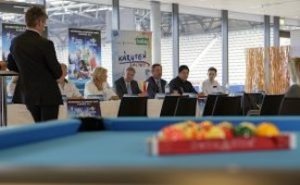 “With around 20 journalists and TV stations present during this announcement, the event promises to be heavily promoted,” said IBPF President David Morris. “Europe has won the first two editions between these two pool giants in 2015 and 2016, but America is determined to improve on its previous showings. They have raised the bar in youth competitions over the last few years which will enable them to send a very competitive team. Europe is also preparing to send a very strong team that is prepared to win the Cup again in 2017.”

“Europe has selected an outstanding location for the 2017 Atlantic Challenge Cup,” said BCA Chairman Chance Pack. “Playing in the Atlantic Challenge Cup is an amazing opportunity and accomplishment for players on both teams. Our players will enjoy their experience in Austria and put all their energy into capturing the 2017 Cup.”

Teams and team captains will be announced in the coming weeks.

Launched by the Billiard Congress of America and the European Pocket Billiard Federation in 2015, the Atlantic Challenge Cup pits the best of youth from Europe and America in a Mosconi Cup style event in a race to 11 with a possible 21 total matches. Six players on each team, four boys and two girls, will battle it out to see who will have the bragging rights across the Atlantic.  Europe has captured the 2015 and 2016 titles.

More information can be found at atlanticchallengecup.com.