CueSports International, Henderson, NV (Jan. 19, 2016) – CSI is pleased to announce that the 2015 Tiger Challenge (Shane Van Boening vs Mike Dechaine) has been released on the CSI YouTube Channel. The match was filmed on July 23, 2015 at the Rio All-Suite Hotel & Casino in Las Vegas, NV.

This challenge match features what many consider to be the two best players in the U.S., and both are known for their explosiveness and pure run-out style. The video even includes player interviews at the conclusion as they explain their thought process at different points of the match.

Played on a 7ft Diamond table with pro cut pockets 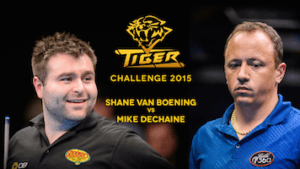 Van Boening is generally considered to be the best player in the U.S. and has dominated the American pool scene since 2007. He really seems to excel in one-on-one challenge matches, often amassing overwhelming leads and discouraging his opponents early.

Dechaine is considered by many to be the second best player in the U.S. behind Van Boening. He has many titles to his credit and in 2015, he landed a role in a reality series called “The Hustlers” which aired on truTV.