Social media sights were buzzing in the last two days with the news that the well respected professional pool player Jimmy Fusco passed away on March 20, 2017. 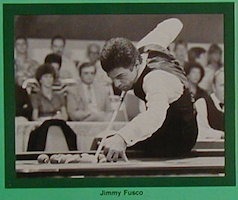 JIMMY  and ME, By Charlie Ursitti

“Here is a shorty story about my late good friend Jimmy “The Philly Flash” Fusco.

It was August 1983 and the PPPA was holding its annual 14.1 Straight Pool World Championship in New York City at the Roosevelt Hotel.

The two finalists were Steve “The Machine” Mizerak and the “Philly Flash”. They both played well all week but today was different. Today they were going to play not only for a bunch of pool fans but for millions of ABC’s Wide World of Sports viewers with Frank Gifford narrating.

In the practice room you could see Jimmy was nervous and Steve was soaking up all the hullabaloo.

Steve destroyed Jimmy that day and after the match I went over to shake Jimmy’s hand. I could see he was broken hearted and was on the verge of breaking down and crying. So I had to figure out something say to pick him up.

“Jimmy, I’m going to tell you something that won’t mean anything now but someday you’ll figure it out. Finishing second for the World Championship today on National television will do more for you than winning the World Title in some obscure pool room”.

Four years later we met in Atlantic City at a tournament and Jimmy comes up and gives me a hug. “You know I figured out what you meant four years ago. A guy just came up to me and said he remembers seeing me on TV losing to Mizerak. That’s been happening often over the years”.

Jimmy now you can play Miz for the title again and this time I bet you win.

The following is from Jimmy Fusco’s  induction in 2008 to the One Pocket Billiard Hall of Fame.

“Known as ‘The Philadelphia Flash’, Jimmy Fusco has matured into one of the patriarchs of Philadelphia’s legendary One Pocket scene. For years a top tournament player and action veteran, Jimmy is one of the very few living Johnston City winners. He was the One Pocket champion in the 1972 Johnston City tournament that was interrupted by the big FBI anti-gambling bust. That bust turned out to be the final blow to twelve years of exciting hustler’s all-around tournaments.

“Fusco happens to be a big pool name in Philadelphia; in addition to Jimmy, his cousin Pete Fusco is another top player and popular room owner. In fact both Fusco cousins got their start playing pool together under the tutelage of Jimmy’s father, who was a very good player in his own day, and a long-time friend of Willie Mosconi. Just to confuse people further there was Mike Fusco, no known relation to Jimmy and Pete, who for years ran the recently closed Boulevard Billiard Club, and who promoted many local tournaments himself. There must be something in the name!

“Philly has always had a tremendous pool tradition, being the home city of both BCA Hall of Fame greats, Willie Mosconi and Jimmy Caras. In fact, when Mosconi was preparing for his first big TV showdown with Fats, it was to Jimmy Fusco that he turned for a little coaching in One Pocket.

“It is no coincidence that Philadelphia has for years been known as a One Pocket town; Jimmy partnered with Grady Mathews to promote several of the first Legends of One Pocket tournaments there. Jimmy has also helped popularize a couple of variations of the game, Back Pocket 9-Ball, and One Ball One Pocket; both of which offer non-One Pocket players an easy introduction to elements of the game. ”