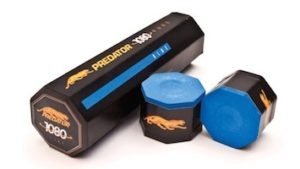 After more than five years of research and development, and three years of testing by the game’s top pros, the next Predator evolution has arrived. Comprised of a special formula utilizing Pure silica and an exacting development process, 1080 Pure was created with one thing in mind — winning.

“I’ve tried a lot of chalk over the years but the Predator chalk is the best I have ever used. It’s the best value for money and simply the best chalk on the market.” – Darren Appleton

“I love the new predator chalk because it is a combination of great quality and a unique style. The revolutionary design and the quality of the chalk makes this product the perfect companion of every pool player! I love it.” – Jasmin Ouschan

“We are very excited to have Predator 1080 Pure Chalk onboard for these events. It is a very high quality product and will make ‘The Greatest Tournament in the World!’ even better” says CSI General Manager, Ozzy Reynolds.

All participants will be given their own Predator 1080 Pure Chalk during check-in at the registration desk. Because of the high quality and cost of Predator chalk, players should keep their chalk with them at all times and should not leave it at the table after a match. Open boxes of chalk will not be available at the Tournament Director’s desk.