OB Cues Ladies 9-Ball Tour held their first tour stop of 2016  at Rusty’s Billiards in Arlington, Texas. Sixty-one players, both old and new, were represented from across Texas and even from Florida, to set record attendance for the inaugural 2016 stop.  The owner and manager, Jeff Pitts and Tim Gildon and the entire bar and wait staff did a wonderful job taking care of all the ladies! Special thanks to our title sponsor OB Cues for providing us awesome products to Rusty’s so they could once again host the amazing $2000 added monies event. Also a big thank you to our tour sponsor MzTam.com for providing re-useable travel bags for all of our players!  Tam you have mad pool skills and creative, classy finesse off the table as well. 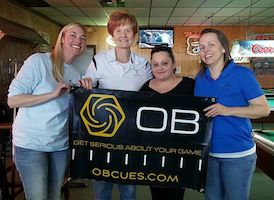 This 1st stop of the year saw many new firsts for the tour. OB Cues Ladies 9-ball tour is now sanctioned under the newly formed nationwide pool tour NAPT. Currently, the NAPT is comprised of established regional tours with an estimated 400 female players nationwide.  NAPT plans to offer more opportunities for all players at all levels throughout North America. For more information, be sure to visit www.playnapt.com for information on their new and exciting adventures in the pool/billiards arena.

There were also several firsts amongst the players. Namely a couple of players from Longview, Texas scored in the money for playing in their 1st event ever—–a feat rarely accomplished first time out. LeAnne Barham finished 13th-16th as well as Teresa Urban who finished 9th-12th. Teresa had an extra special event wherein her name was drawn for the player’s 10-Ball break and run pot of $321 and she pocketed 2 balls on the break where she took her $64 dollars and was satisfied with that extra score. These ladies, as well as other East Texas contingents, represented their area very well and hope to see them at future OBCLT events.

Also Emily Sumrall of Arlington, playing in her 1st time OBCLT tour stop, finished 9th-12th and had an superb tournament weekend.  Emily has always been a strong competitor and shooter. We hope, too, that she will continuing her winning ways at more stops.

With 61 players in full force, it was anybody’s guess who would fare the best and be the final 16 returning on Sunday morning. The final eight in the winner’s bracket were Jennifer Pavlovick vs. Orietta Strickland, Alicia Stanley vs. Tara Williams, Corina Campbell vs. Emily Sumrall, and Teresa Urban vs. Terry Petrosino. The eight ladies returning on the one loss side were Jeannie Kim vs. Jennifer Kraber, Monica Anderson vs. Jeannie Seaver, Natalie Mans vs. LeAnne Barham, and Tracie Voelkering vs. Chris Fields.

Eliminated first round Sunday morning at the 13th-16th positions were Jeannie Kim of Carrollton, LeAnne Barham of Longview, Tracie Voelkering of Fort Worth, and Monica Anderson of Dallas. Following in the 9th-12th positions were Emily Sumrall of Arlington, Teresa Urban of Longview, Natalie Mans of Houston, and Chris Fields of Weatherford. The 7/8th positions went to Jennifer Pavlovick of Irving and Jeannie Seaver of Rockledge, FL while the 5/6th positions were filled by Jennifer Kraber of Austin and Corina Campbell of Dallas. Alicia Stanley of Aubrey, in her first stop since 2010, showed exceptional tables skills to take the fourth place spot.

In the winner’s side, Tara Williams battled her way through Saturday with some close wins over Jeannie Seaver (7-6), Natalie Mans (7-6), and Jennifer Yo (7-4). On the other side of the winner’s bracket, Terry Petrosino was making her way through her Saturday matches with her steadily consistent play. She posted wins over Snowy Belt (7-0), Robyn Petrosino (7-3), and Marilina Nieves (7-3).   In the hot seat match, both players struggled to find their groove, making some uncharacteristic mistakes. Tara ended up taking the match 7-3 and waited to see who would be coming through the one-loss side to meet her in the finals.

For the 3rd place match, Orietta was on fire all the while pocketing balls and getting out from almost everywhere she shot from. She made quick work of the match against Terry Petrosino of Spring, winning with a final score of 7-1. Congratulations to Terry for another great tournament!

In the finals, Orietta would need to beat Tara twice to claim the first place spot and the $750 in prize money. Both players put on a spectacular show of skill and determination, filling the match with run-outs and strategic safeties. Neither player could gather a lead, trading games back and forth the whole match. It came down to a hill-hill match with Tara on final break. She made a ball and had a shot on the one-ball, but difficult shape to get on the next ball. She overshot the one-ball, leaving a tough 3-9 combination, which she pocketed, not giving Orietta a chance to get to the table in the final game. Congratulations to both ladies for an exciting finals match and great tournament finish! With this sixteenth tour stop win, Tara Williams ties the OB Ladies Tour record for most wins by a single player. Lisa Marr is the only other player in tour history to hold sixteen tour stop wins.

Thanks again to Rusty’s for our first tournament of the year, and to all our board members who do a fantastic job all year around.

Special recognition and thanks to OB Cues our main tournament sponsor. If you want to get serious about your game, check out OB Cues at www.obcues.com

Also many thanks and love to all our families, fans, supporters—we greatly appreciate each and every one of you. Also to the many, many ladies/ players/friends who traveled from near and far; we loved seeing you all again and greatly appreciate you making the journey to play on the OB Cues Ladies Tour. We look forward to seeing everyone once again in 2016. Our second stop of the 2016 season will at Legends Billiards in League City, Texas, March 19-20th weekend.

Check us out at www.obcuestour.com or stay up to date with instant news by adding us on Facebook/obcuestour