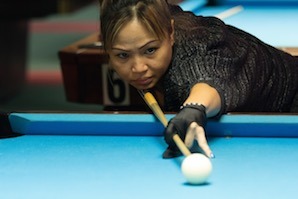 It was a slow start for Houston’s Ming Ng who lost a fourth round match to Gail Eaton, 7-6, and although Eaton went on to face 2014 Gulf Coast Tour Champion Belinda Lee for the hot seat, Ng reentered the scene to stake her claim, winning an impressive 7 straight matches to take home the title, 2015 Gulf Coast Tour 10-Ball Champion, at Bogies Billiards in Houston, TX.

It was a choice weekend to win on the Gulf Coast Tour which hosted its first 2-day event on September 12th-13th, 2015, drawing a record 48 women, paying out close to $2,000 in prize money, and offering a qualifier spot for the 2016 WPBA Masters event.

Thanks to an anonymous sponsor, room owner David Richardson, and tour sponsors Delta-13 Rack and the APA of North Harris County, the Gulf Coast women enjoyed their most successful event since the tour’s 2013 inception. “This tour is growing by leaps and bounds, and we look forward to building on this event, and our 52-player, WPBA membership”, says tour director, Kimberly Newsome. “This tour offers experience; it’s competitive, mixed with a little fun and craziness. It’s a perfect balance that allows players to take their game to the next level, and create friendships along the way.”

Although most of the competitors had never played a single game of 10-ball, everyone caught on very quickly, and had a great time doing it. On the battle field, veteran player Ming Ng fought her way through a distinguished field of 48 women with wins over Kim “Texas Heat” Pierce, Yvonne Garcia, and newcomer Sophie Salinas, 7-4, before losing to Gail Eaton, 7-6. Belinda Lee took down Cindy Cole, 7-1, Terry Petrosino, 7-3, and Liz Mitchel, 7-0. Daughter, Robyn Petrosino, made her own bid for the hot seat with wins over Karen Reilly, 7-3, Shannon Collins, 7-1, and newlywed Natalie (Esparza) Rocha, 7-2, until falling to Eaton, 7-5. Loretta Lindgren came out firing as well, ousting Bonnie Mason, 7-2, and Mandy Hood, 7-3, until losing a nail-biter to Lee, 7-6. On the one loss side, after losing her first round match to newby Theresa Mireles, 7-3, Ricki Casper won 6 consecutive matches, eliminating Darcy Whatley, 7-2, Mindy Williams, 7-5, Austin’s Erica Hanlon, 7-0, Mitchel, 7-5, Pierce, 7-2, and R. Petrosino, 7-3. Contender Tara Williams was taken down in the first round by Teresa Garland, 7-2, but went on to eliminate Toni Esteves, 7-3, Terry Petrosino, 7-3, and Tina Allen, 7-4, before being ousted by Ng, 7-3. Ng went on to defeat Rocha, 7-6, Lindgren, and finally Casper, 7-6, while Eaton made quick work of securing the hot seat match over Lee, 7-3. Ng overcame Lee, 7-4, the final obstacle standing between her, and Eaton. In the first set of the true, double elimination final, Eaton jumped to a 5-0 lead. Directly off a five-game winning streak, momentum unwavering, Ng came back to win the first set, 7-6. In overtime, Ng came on strong, closing out the final set, 7-5. Congratulations to Ming Ng on her 2015 Gulf Coast Tour 10-Ball title and to Gail Eaton who secured the WPBA qualifier spot. 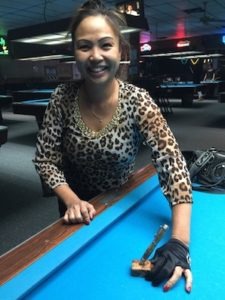 Derrell Montgomery, official tour referee, tour supporter, and pool philanthropist, awarded the 10-ball champ with a hand-crafted and engraved, trophy pen. Each one of Mr. Montgomery’s pens is one-of-a-kind, and it’s a Gulf Coast tradition to award a “Montgomery Trophy Pen” to each year’s tour champion. 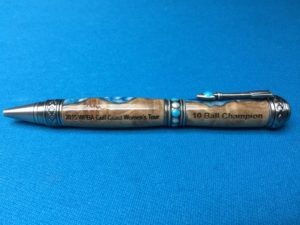 Mr. Montgomery also donated two pens to the Emma Davis Memorial and Family Benefit, held this past weekend in conjunction with the Gulf Coast Tour event. Emma Davis, wife of famed Texas pool player, James Davis Jr., and mother to infant son, James Davis, Jr. III, passed in her sleep, on September 9th, 2015. Upon hearing the news, the women of the Gulf Coast Tour and the entire Texas pool community, donated numerous auction and raffle items to help raise funds for the family. Over the weekend, with a baked goods auction, silent auction, raffle, and donations, the group raised nearly $5,000. Emma Davis was an avid pool player herself, a Gulf Coast Tour member, and a conditional member of the Women’s Professional Billiard Association. Emma was the “sweetheart” of the Texas pool community, and at only 28 years of age, touched many lives, near and far. “Gone but never forgotten” echoes throughout social media, and has become a mantra for Davis’ family and friends. Numerous fundraisers have been scheduled to assist the family in their time of need. The next one will take place at Bogies West, 9638 Jones Road in Houston, this Saturday, September 19th, 2015, during the Viking Tour stop.

Players, friends, and fans, the final 2015 Gulf Coast Tour event (#6) will be held Saturday, October 10th, 2015, at Bogies Billiards & Sports Bar (FM 1960 location). The players’ meeting begins at 11:00am. All new players’ dues will be good through 2016! This event will take place alongside the final event for the Lone Star Billiards Tour.