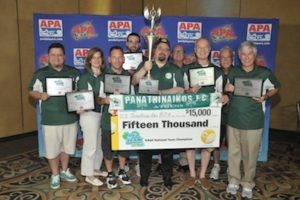 Panathinaikos ousted Fried Pickles of Houston, Texas, in the semifinals while the South Georgia Hustlers defeated Shooter’s 2 of Pelham, N.H.  Fried Pickles and Shooter’s 2 each received $3,500 in prize money for making to the final day of competition.

The Gray Eagles of Orting, Wash., were presented the Sportsmanship Award in the 9-Ball division.