Morris, Calhoun Elected to Billiard Congress of America Hall of Fame
Broomfield, Colo., July 20, 2016 – The Billiard Congress of America Hall of Fame welcomes a pair of powerful left-handed champions to the class of 2016. The United States Billiard Media Association today announced that smooth-stroking Hawaiian “Rocket” Rodney Morris and “The Texas Belle,” Belinda Calhoun have earned induction as the 67th and 68th members of the sport’s most prestigious hall of fame. 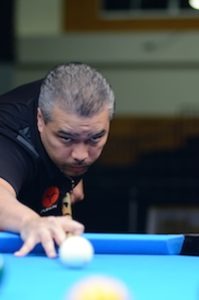 Morris, 46, will enter the Greatest Players wing of the Billiard Congress of America Hall of Fame, while Calhoun, 63, will be honored in the Veteran Players category. Both will be formally inducted during ceremonies on October 20, 2016, at the Norfolk Sheraton Waterside in Norfolk, Va.

Born in Anaheim, Calif, but raised in Hawaii, Morris burst onto the pool scene in 1996 when, as a 26-year-old, he thrashed Efren Reyes in the final to capture the U.S. Open 9-Ball Championship. Just hitting his playing prime, Morris was away from the game for nearly four years following a federal drug conviction. A remorseful and rededicated Morris returned to the game in 2001 and won the year-ending Sands Regency Open. Over the next six years, Morris captured the UPA Pro Tour Championship, the Matchroom Sports-promoted World Pool League title and the World Cup of Pool. He finished second to Reyes in the IPT World 8-Ball Championship in 2006, earning $150,000. Morris also made eight appearances on Team USA in the Mosconi Cup, earning MVP honors in 2004. More recently, Morris captured titles at the Turning Stone Classic and the U.S. Open 10-Ball Championship.
“I want to cry,” Morris said, who lives in Lincoln, Calif. “It is validation and recognition of all the years and hard work I’ve put into this game. Getting into the Billiard Congress of America Hall of Fame is especially gratifying because I came from a broken home, wasraised on the streets and made just about every mistake you can make. But I persevered, which proves that everyone can do something great it they dedicate themselves to it.” 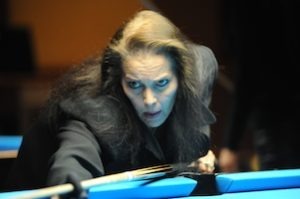 Born Belinda Campos in Austin, Texas, Calhoun was one of the Women’s Professional Billiards Association’s top stars through the ’80s, capturing a pair of BCA National 8-Ball Championships titles, the Texas River City Open and the NPCA Classic Cup 9-Ball title. Calhoun dominated 1985, winning the Women’s World 14.1 title, the WPBA National Championship and the U.S. Open 9-Ball Championship. That same year, she was also named “Player of the Year” by Billiards Digest and was named to the Pool & Billiard Magazine “All-Stars.” Calhoun was credited with running seven racks and out during the 1993 World 9-Ball Championships.
In addition to her stellar playing career, Calhoun has been active in organization administration, serving 20 years on the WPBA Board of Directors, six years on the WPA Board and several years as a Billiard Congress of America Board Director.
“This is a wonderful surprise,” said Calhoun, who now resides in Fork, S.C. “I had resolved myself to the idea that [getting into the Billiard Congress of America Hall of Fame] wasn’t going to happen. I’m honored. I had always thought my career was deserving, so this is very gratifying. I feel like I’ve served the sport well for a long time.”
Voting for the 2016 Hall of Fame was conducted by the USBMA Hall of Fame Board, which consists of USBMA members, elected At-Large members and living members of the Hall of Fame. To be eligible for consideration in the Greatest Players category, a player a) must be 40 years old by Jan. 1 of the year of their inclusion on the ballot; b) must have a professional playing career of at least 10 years; and c) must have recorded significant achievements in U.S.-based and international events.
Morris edged Women’s Professional Billiards Association champions Gerda Hofstatter and Vivian Villarreal by a single vote. Morris was named on 48 percent of the ballots, while Villarreal and Hofstatter were named on 47 percent. Kim Davenport was named on 26 percent of the ballots, while Shannon Daulton and Jeremy Jones received votes on less than 25 percent of the ballots.
Calhoun’s nomination was recommended by the Veteran Players Committee, which reviews the careers of players who were not elected in the Greatest Players category prior to turning 60, at which point they are removed from the ballot. Induction for a Veteran Players nominee is achieved if more than 50 percent of the Hall of Fame Board votes in favor of the candidate.
About United States Billiard Media Association
Founded in 2007, the United States Billiard Media Association (USBMA) is a non-profit association dedicated to elevating the visibility and status of billiards in the media at large. The USBMA consists of professional print, radio, TV, public relations and Internet media persons who cover cue sports. One of the association’s main functions is electing of billiard media members to the Billiard Congress of America’s Hall of Fame Board for the purpose of nominating and electing players and notable figures to the Billiard Congress of America Hall of Fame.